Lord of the Nile by Constance O'Banyon 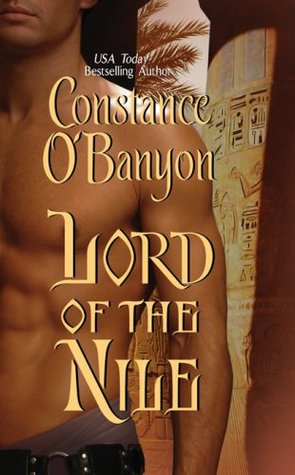 This book review is brought to you by Chardonnay. Chardonnay all day, er'y day. 🍷✨

When I was a little girl, I was obsessed with two things: Dinosaurs and Ancient Egypt. Today, that obsession has mellowed out into a chipper, "Oh, there's a romance novel about that subject? Let me just get right on that." Especially if they're free or on sale (I feel like the vast majority of my romance novel reviews either begin with "I got this when it was on sale" or "a publisher gave this to me and I'm a trash queen who can't say no").

LORD OF THE NILE was on sale for 99-cents a while ago as part of a Kindle Countdown Deal (and I'm a trash queen who can't say no). Danae is the daughter of an Egyptian animal tamer. He's on his deathbed and takes that dire moment to drop a major truth bomb: she's not his real daughter. He can't - or won't - tell her who her real parents are, but he does tell her that she needs to beat it or her not-cousin is going to abduct her as his sex slave when he inherits.

So, Danae flees to Egypt to make nice with Ptolemy in the hopes of keeping her freedom. On the way, she meets this guy named Ramtat, who she meets when he's in Roman garb but then appears to be an Egyptian soldier later on, after he changes costumes. It turns out that he's a double-agent for Caesar and because of what she saw, Caesar now wants her dead. Instead of killing her, y'know because penis, he abducts her to his Bedouin camp in the desert because not only is he an Egyptian soldier acting as double agent to Caesar and the Romans, he's also a Bedouin sheik. Of course.

I made it to the end of this book, but barely. I didn't really care for the hero or the heroine and I thought their romance happened far too quickly given the circumstances. Ramtat did some pretty skeazy things and then tried to play the nice guy card. Yeah, good luck with that. I can stomach heroes who do bad things but it has to be treated with the proper gravitas. Danae had potential - I thought the idea of a female animal tamer was neat - but that wasn't really put into action in the story and she actually came across as fairly helpless.

Honestly, a book about court intrigue revolving around Cleopatra, Ptolemy, and Caesar could have been so good but this was Grand Central Trash Station™ and not in the fun and racy Rosemary Rogers sort of way. It was fun to see the creep cousin get his comeuppance at the end, though.

Also, fun fact: this book came out when I was still in high school, and I think that thought is scary enough that it warrants another glass of Chardonnay.

P.S. The cheetah dies at the end. You're welcome.