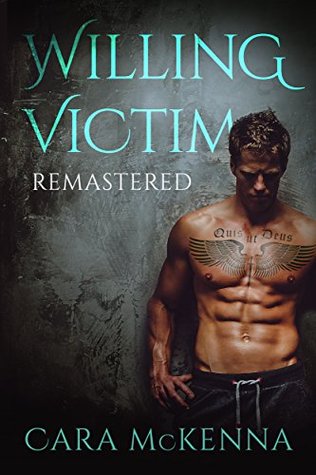 I told myself I wasn't going to buy any more ebooks until I cleared out my Kindle, but then I saw one of my friends' reviews for this book pop up in my feed, and realized it was a whole dollar cheaper than the last time I looked at it, and it was remastered and expanded.

Well, shoot...so much for any pretense of fragile self-control.

To be fair, WILLING VICTIM has been on my to-read list for a while. I've had half a dozen people recommend it to me, and the summary seemed really good. Plus, I've read another book about rape play, called ASKING FOR IT, and the inevitable comparisons between the two books made me even more curious.

ASKING FOR IT is also a full-length novel, which means it has times to expand on characterization and relationships in a way that WILLING VICTIM, which is a novella, doesn't.

I liked both books, but I do think that being a longer book gives ASKING FOR IT an advantage that it definitely utilizes to its fullest extent, which is probably why I enjoyed that book more. WILLING VICTIM, on the other hand, has better characters, and given the page time they have, I think the author did a fantastic job breathing life and complexity into them. These characters have their fair share of issues too, but it's more normal, run-of-the-mill stuff that doesn't tie into histories of abuse.

Let's take a moment to appreciate the hero in this book, Michael Flynn. He really is a decent guy. Yes, he's into some edgy stuff in the bedroom, but the author makes it very clear that Flynn would never go beyond what a woman wants, and would always stop if she said stop. I also thought it was really sweet that he watched to make sure that women leaving his apartment got into their cars safely. That is such a considerate thing to do and speaking as a woman, I love it when men do this. Also, those arms and abs. And that accent. I'm sorry, but I can't even right now.

Will definitely have to check out some of this author's other work!