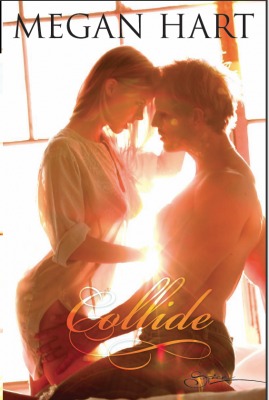 Megan Hart is one of my go-to guilty pleasure reads. She isn't afraid to write outside of the box and try new genres, and the quality of her writing is a level above most books in the genre. The only thing that keeps her from being a favorite is that she writes just as many misses as she does hits. This...was a miss.

COLLIDE starts off promisingly enough. Emmaline had a traumatic head injury when she was young, which has caused her to intermittently experience fugue states where she blacks out. Her fugues seem to have gone into remission so for the first time (in her thirties) she's moved out of her parents' house.

She and her friend Jen frequent a coffee place called Mocha, which also happens to be the hangout of local artist/ex-model-slash-actor from the 70s, Johnny Dellasandro. The moment Emmaline lays eyes on him, she becomes obsessed, and starts watching all of his movies, buying a ton of his memorabilia, and contriving to worm herself into his life by any means possible - including stalking.

Emmaline's fugue states also start up again, preceded by the smell of oranges. In her fugues, she pictures herself back in the 70s, having sex with a Johnny who's thirty years younger, and in his sexual prime. Soon, past and present become increasingly difficult to distinguish and as her fugues become worse and worse, Emmaline begins to fear that she'll lose her freedom...and Johnny.

I didn't like the relationship between Emmaline and Johnny. It was obsessive and unhealthy, and I didn't buy the connection between them. The age difference wasn't handled well (she's in her thirties, he's in his fifties, and at one point in the story the heroine's mom says that practically makes him a pedophile). Their relationship was completely sexual and the sex scenes were OTT. Every other chapter! It got to the point where there was just no tension or anticipation and I began skimming every time they took off their clothes. The paranormal element was also at odds with the story.