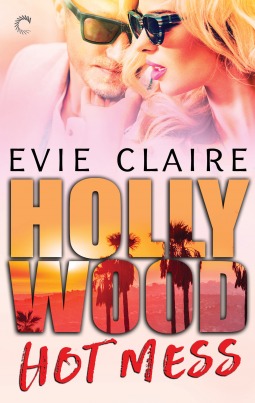 Devon Hayes is part of the HeaVon (Heather) power couple. He's fourteen years older than Carly and seems to have all his shit together. Naturally, Carly hates him. And when she makes the mistake of admitting that to a reporter, she fully expects to be fired. Instead, she gets invited to Devon's tropical island getaway.

Carly is so broken, and this makes her bitchy, self-centered, and mean. It's rare to see an author who can write a character who is so damaged and unlikable and yet still make you feel sorry for them, but Evie Claire manages to do this not just with Carly but also with Devon. Both of them are trapped in a glass fishbowl, unable to be themselves, and so they lash out against the glass, even though it hurts them, because they're powerless to do anything else. It's really quite heartbreaking.

Carly never tells Devon the truth about why she does the things she does, and Devon doesn't tell Carly his secret, either. Unexpected, but not necessarily unwelcome. I'm far too used to books where both characters spill everything after one night of good sex, so it seemed more in line with their characters that they would be more guarded, even after some impromptu acts of intimacy.

The Hollywood Hot Mess series is the good kind of trashy that you can expect from manga or soap operas. In other hands, I feel like this book could have come off as silly or clumsy, but the writing for HOLLYWOOD HOT MESS was actually really, really stellar, and there's some incredible characterization for the main characters and the supporting characters that will have you wanting to scream or cheer by turns. Thank God I have the second book waiting in the wings...

Also, speaking of lockdown, just who the heck is this author? They're not on Goodreads and there are no links to Twitter, website, or Facebook pages in the back of the book. Is this the pseudonym of someone famous? Tell me who you are, please, so I can trumpet your name from the rooftops!