Beyond Shame by Kit Rocha 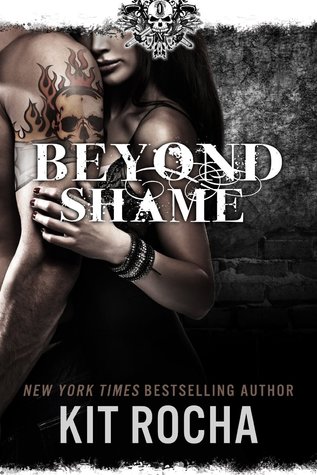 The title is scarily appropriate. BEYOND SHAME is one dirty book and has absolutely zero shame about it.

Society has been thrown into upheaval by solar flares that destroyed some of our most integral technology, forcing us to rebuild. As with Hunger Games, this area has carved itself up into various "sectors" with Eden doubling as the Capitol.

Noelle Cunningham has been kicked out of Eden because of her - gasp! - debauchery. She was caught drinking and having sex. How dare she. Members of the biggest, baddest gang, the O'Kanes, see her wandering around like a lost, sexy, sad-eyed lamb and take pity on her - they bring her in to their boss, Dallas.

Dallas is passingly attracted to her, but it's Jasper who wants to save her. He and Noelle eventually end up in a sexual relationship where they sometimes pair up with Dallas and Lex. In the meantime, there's tons of drama. Lex doesn't like that Dallas acts like he's already collared her, and pushes him away with passive-aggressive pettiness. Noelle feels guilty about wanting sex, but is instantly amazing at everything she tries in spite of her inexperience (curse you, Sex Fairies!).

I liked the idea of scavenging renegades fighting against an oppressive, yet oddly materialistic regime in the remains of our tattered world. I would have liked to see this explored in greater depth, because it could have made the story great instead of so-so. Sadly, its only purpose is to serve as a doomy and gloomy backdrop to lots and lots of sex, which tends to fall in the same old stereotypes despite some innovative prop use.

I was looking through the reviews for this book to see what my friends thought, because I can see BEYOND SHAME being controversial. It was. Some of my friends really enjoyed it - and I can see why. The sex, for what it's worth, is well-written and the quality of the writing itself is very good. If you're looking for something purely pornographic that won't make you feel like your IQ points are ticking away by the second, BEYOND SHAME fulfills that purpose like a dream.

However, I think I feel more similarly to Heather. I thought there was too much sex, and would have liked to have seen more focus on the story itself because after a while Noelle's needy sex-addiction and constant desire for validation really began to wore on my nerves. Like Navessa, I also wasn't really a fan of the woman-on-woman sex for the purpose of male titillation or the group sex.

Email ThisBlogThis!Share to TwitterShare to FacebookShare to Pinterest
Labels: erotica