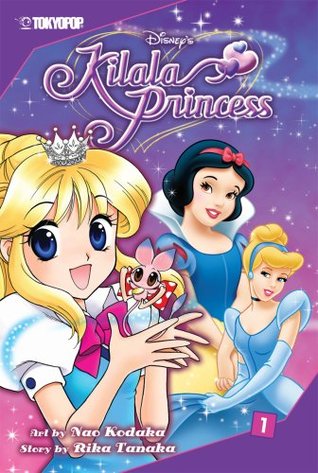 KILALA PRINCESS is one of the more bizarre manga I've come across. It's about a Disney-obsessed young girl who's girly and very much into her own world. Her school is having a princess competition, where the most popular/prettiest girl gets nominated as princess (kind of like a prom king/queen), and she's so sure that her pretty and amazing best friend Erica is going to win. Coincidentally enough, a boy named Rei turns up in her front yard one day claiming to be hunting for a princess who will shift the balance in his kingdom. He has a tiara that can only be wielded by the chosen one, and which many goons are after because they don't take kindly to princesses, whatever that means.

When said goons kidnap her friend, Erica, she ends up chasing them down into a magical world where the Disney princesses exist as real people and help her on her quest. Not just to save Erica, but to do something bigger - help a magical kingdom. A bit cheesy, I know, but when you get offered a free copy of a rereleased manga for review, are you going to turn it down? I didn''t think so.

Kilala is a stereotypical shoujo heroine. She cries at the drop of a hat, whether she's impassioned, happy, or genuinely sad. When she meets the hero for the first time, she immediately decides that she ought to kiss him (he's unconscious by the way - hey, it worked for Sleeping Beauty, she thinks). She's a good person, but doesn't have any agency of her own; her actions only exist to push along the plot. You can definitely tell that this is a book for younger readers, and while that isn't necessarily a bad thing, it means that I'm not part of the target audience for this book and that has an impact.

As others before me have mentioned, the art is gorgeous, and it's cool to see Disney princesses in an alien context. The idea of a Disney-themed magical girl was also intriguing, and I suspect that each Disney princess has a power that will end up helping Kilala later on in the same way that each of the Sailor Scouts' individual powers help Sailor Moon on hers when combined.

KILALA PRINCESS actually reminds me of a shoujo manga I liked when I was a freshman in high school, which is also stereotypically girly and totally OTT. It's called WEDDING PEACH and is highly reminiscent of Sailor Moon as well, except instead of turning into sailors, they turn into a bride and two bridesmaids. Their powers come from the four "somethings", taken from the wedding superstition of something borrowed, something blue, something old, and something new, and of course there are these cheesy henchmen who want to destroy love and caring all because they can. Some manga are so girly that they're almost parodies of themselves, and Kilala is like this.

Email ThisBlogThis!Share to TwitterShare to FacebookShare to Pinterest
Labels: from netgalley