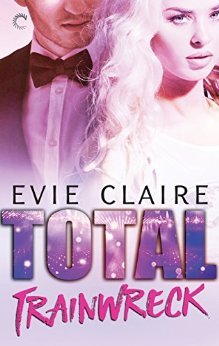 I was psyched when I received ARCs of both Hollywood Hot Mess and Total Trainwreck from Netgalley. HHM was a really great portrait of the toll celebrity life can take on a damaged soul. Carly Klein was tormented by tragedy, and struggling to overcome her addictions to drugs, alcohol, and high risk behaviors. When she met another actor who was just as broken as she was, only slightly better at hiding it, there was drama of the kind you normally only see in manga or telenovelas, and it was just as addicting.

HOLLYWOOD HOT MESS doesn't exactly end on a cliffhanger, but it does end on an unresolved note. Both Carly and Devon have secrets that they haven't told one another, and by the end of the first book they still haven't confided in each other.

TOTAL TRAINWRECK starts out with Carly recovering from a mean hangover after a night of regression following Devon's revelation that he will never leave his common law wife for her. There's a lot of "we can't be together, it will destroy us" nonsense before Devon finally confesses what his big secret is. The sad thing is, he doesn't actually confide in Carly until his evil common law wife, Heather, shows Carly a copy of the tape that she's using to blackmail her husband with.

The drama I liked in book one is still present, and to be fair, TOTAL TRAINWRECK does handle a lot of things really well. But whereas in the first book, I sympathized with both protagonists even if I didn't like them as people, in TOTAL TRAINWRECK I actually really started to hate them. A lot.

First, even though they resume their relationship and do a lot of sneaking around, Devon still insists that he can't be "officially" together with Carly and he never takes her anywhere nice. They just have sex in dark rooms and dark corners. Despite this, he gets incredibly jealous if Carly associates with other guys, and later on, something happens, and Carly has to make a very important life choice which Devon totally tries to commandeer. And I was like, "Um, excuse you. Just who do you think you are? You have no right to try to micromanage such an important decision like that, especially not with guilt trips, you big fat hypocrite!"

Second, I actually felt really bad for Heather, and I was disappointed that the Heather ARC was resolved the way that it was. It was brutal and cruel. She was a terrible person, but I didn't think she deserved what happened to her. And since both Carly and Devon were responsible for what happened to her, that made me like them a lot less as a result.

Third, the quality of the writing goes way down in this book. The sex scenes are awkwardly written, I started noticing more typos (and the first book had none), and there's a portion of the book that involves an Italian priest who speaks Spanish instead of Italian, and when he's giving a command, he says the (Spanish) noun instead of the (Italian) command imperative verb conjugation.

Fourth, there was a strange, borderline-homophobic moment in the book that made me uncomfortable (the heroine freaks out when asked if she's a lesbian). There's also a lot of pro-life stuff that is shoved down the readers' throats towards the end about how babies are always miracles and people who love their spouses don't abort children...I always question why content like this is included in books like these, especially if the heavy subject matter is at odds with the rest of the narrative.

For the most part, this was still a decent book, and the writing quality is mostly okay. But it was a significantly poorer quality effort than its predecessor, HOLLYWOOD HOT MESS, and had some really strange scenes that were bizarre even for Hollyweird. I really had to suspend my disbelief. I was also very frustrated that the child abuse plot line never is fully resolved, despite the fact that the author spends two books building up to Carly's ability to acknowledge and deal with it consciously. After all that, you're just going to skip over the entire confrontation scene? So disappointing.