Out On Good Behavior by Dahlia Adler 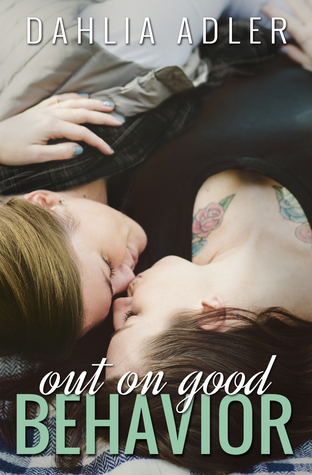 We read OUT ON GOOD BEHAVIOR as a nod to Pride Month in my romance book club/discussion group, Unapologetic Romance Readers. Dahlia Adler has made a name for herself advocating diversity and intersectionality in YA and NA, and I've been meaning to read her for a while, so kudos to sraxe for getting the ball rolling on that with her recommendation.

OUT ON GOOD BEHAVIOR is a love story between a pansexual girl named Frankie Bellisario and a lesbian named Samara Kazarian, who's so deep in the closet that she's got one foot planted firmly in Narnia. Both girls have a deep and undeniable attraction for each other, but Frankie enjoys sleeping around with whichever one of her FWBs she has on call and is reluctant to enter the monogamous lifestyle and Sam has a republican family who's majorly into politics and she's terrified of what will happen when word gets out - especially if there's no committed relationship for her to fall back on. Who wants to go that alone?

Frankie wants Sam, but she doesn't want to commit. It's basically the stereotypical "playboy settles down" stereotype that's so prevalent in YA/NA, except gender-flipped. On one hand, this was refreshing, because women are often portrayed as meek virgins who have no idea how to go about pursuing their sexuality until a man walks up with the key, but there's still a virgin in this story - the only difference is in this case, the playboy and the innocent are both women. And all refreshing changes aside, I have to say that gender-flipping the stereotype didn't make it any more palatable.

Here's the thing about Frankie. I think she's kind of creepy. Sam's her friend's roommate, and while in their room, Frankie starts sniffing Sam's stuff and touching all of her things until her friend tells her to stop. She essentially says that if Sam doesn't want the attention, she shouldn't be so attractive. She uses her FWBs as substitutes for Sam to vent her sexual frustration, and spends a huge portion of the story whining about how she doesn't want to be tied down to anyone else. She also plays into a lot of the pansexual stereotypes (they don't know what they want, they can't keep it in their pants, they're not monogamous, they're attracted to everyone), as sraxe and Red both pointed out in their reviews, which is unfortunate.

For a while I sympathized with Samara, because who hasn't been attracted to someone they perceived as being the "wrong" person? I've been in that position before as a young adult, and it's difficult. Her struggle between wanting to pursue romantic happiness and her terror at being abandoned by her friends and family was really touching, and it saddened me that this wasn't really explored in greater depth (and her racist/bigoted family kind of disappears from the story entirely once Sam and Frankie get involved - were they OK with it after all, or do they just plan to conduct their relationship in secret forever and ever?), as I feel it's a topic that many LGBT+ people struggle with (sadly) daily.

My feelings for Samara changed after what I'm going to call The Misunderstanding. As with the last book I read - RUINED BY RUMOR - the conflict in this book hinges upon the two pigheaded MCs being too stubborn to talk to each other for five minutes, so they end up hurting each other until the truth is revealed. One of the most important factors in any relationship is communication, so the fact that an understanding of this magnitude could happen really did not bode well for the couple. I also found it difficult that Samara, even as inexperienced as she was, would not want protection or an STD test before initiating a sexual relationship with someone who had as many sexual partners as Frankie, especially since she was actively sleeping around with people who weren't exclusive, either.

I appreciated what OUT ON GOOD BEHAVIOR was trying to do, I just didn't like the characters it was doing it with. OOGB could have been an F/F version of Elle Kennedy's THE DEAL, and instead it was, well, just another basic new adult love story. I did like the female friendships in this book - something that many new adult books lack - and the dialogue, for the most part, flowed naturally and was engaging. Adler is not a bad writer by any means - something else that sets her apart - and I would read another book of hers, because I think I could really like her work. This one just wasn't it.

For what it's worth, though, the sex scenes are hot.