Ruined by Rumor by Alyssa Everett 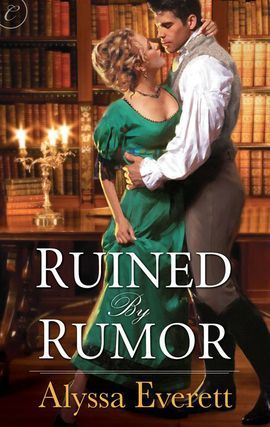 This was a buddy read with my wonderful Goodreads book group, the Unapologetic Romance Readers. We had two books of the month for June - one was KULTI and the other was RUINED BY RUMOR. Being a fan of all things historical, I knew immediately which of the two books had my vote!

Right away, I realized that RUINED might not be my cup of tea. Roxana is a spoiled, superficial princess-type character who is very self-centered and naive in the worst possible way. She will go into situations, look around at what's happening, and immediately find the most cock-eyed explanation for what's going on. This is a girl who would watch Blue's Clues and think she's brilliant for finding the 32" x 32" royal blue paw print on an otherwise white wall.

She's engaged to a soldier named George Wyatt who actually reminded me a lot of Wickham's character from PRIDE AND PREJUDICE. He's charming and boisterous and very popular with the ladies. A little too popular, as Roxana soon finds out - he dallied with many foreign women while stationed abroad, even as his fiancee waited for him chastely back in England. Events transpire that result in the engagement falling apart, leaving Roxana feeling utterly disgraced.

And then, if that weren't enough, she is compromised at a party by the very man she's believed has scorned her for all these years - Alex, Lord Ayersley.

Ayersley has actually been in love with Roxana for all these years but has been too shy and awkward to say so. But his happiness is tainted by the knowledge that Roxana doesn't like him, and is marrying him solely to avoid her own ruin. I actually liked Ayersley for 80% of the book because he's a sweet, sexy, beta male and how can you not like that? But then there is another Big Misunderstanding that causes him to say some incredibly hurtful things before storming off under a cloud of butthurt.

I suspect Everett was attempting to channel a bit of PRIDE AND PREJUDICE. The alliterative title, regency setting, and the characters that are reminiscent of Darcy and Wickham completely went over my head until I actually sat down to write this review. That's because Roxana is not an Austen heroine. She's not complicated or fiery or intelligent or complex enough, and PRIDE AND PREJUDICE really only had one misunderstanding between the h and the H - not five.

That's my biggest problem with this book, and what ultimately ended up preventing me from enjoying it. The entire premise is hinged on multiple misunderstandings that could have been resolved (and are! at the end!) with five minutes of conversation. Ayersley thinks Roxana doesn't like him. Roxana thinks Ayersley is in love with another woman. Ayersley thinks Roxana is cheating on him. Roxana thinks Ayersley won't sleep with her because he doesn't love her. It goes on and on.