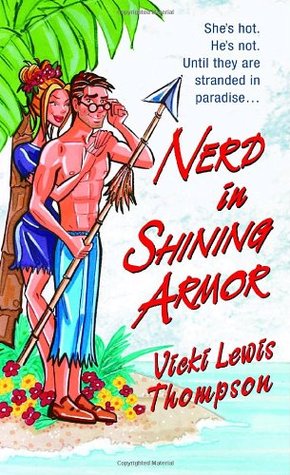 You know, for a book that's supposedly about nerds saving the day, this book sure puts us down a lot. And I mean, a lot. In fact, every main character at one point takes part in some nerd-shaming.

Genevieve Terrence, the main character, is an ex-hillbilly currently residing in beautiful Hawaii. Jack Farley, the titular nerd in this story, has been crushing on Genevieve ever since they started working together. Gen hasn't noticed, because she's infatuated with her boss, Nick "It's not sexual harassment if they want it" Brogan.Yes, this is one of those books where the heroine mistakes aggressive sexual behavior for the overtures of a long term relationship. And even though she knows that Nick is only inviting her on the business trip to Maui because he wants a one-stand, she is convinced that she can change him. After all, he looks like Cary Grant. He'd make a great husband. He just had a troubled childhood.

Jack throws a wrench in this would-be "romantic" getaway because he's been invited too, to troubleshoot problems in their sister branch, Aloha Pineapple. He's thrilled, because he knows that when Nick inevitably leaves her a sobbing, weepy wreck, he can be the one to pick up those soggy pieces, and tenderly make love to her until she forgets her woes. Because as everyone knows, niceness is totally a synonym for manipulative opportunist.

Unfortunately for all three characters, the plane never makes it to Maui, and Nick isn't what he seemed. (I mean, beyond not being Genevieve's future husband.) The plane gets wrecked, and Genevieve and Jack are marooned on a tropical island with two energy bars and six condoms.

At first, NERD IN SHINING ARMOR was an okay read. It had some troubling gender stereotypes, but most books written during this time period did. And there's something about the chatty, overly familiar narrative style of chicklit written during this time that really appeals to me. Probably because the first romances I ever read were written in this style, and reading them makes me nostalgic.

But I have limits, and this book crossed them about half a dozen times.

Here are some examples:

We learn that Genevieve lost her virginity when she was thirteen-years-old, because she is a hillbilly, and this is all that hillbillies have to do for entertainment because they don't have video games or TV. Genevieve traded hers away because the boy she was dating promised to take her out to the movies for a month. Spoiler alert: he lied.

Genevieve's hillbilly act got old fast. By the end of the book, she was making so many "you know you're a redneck when..."-type comments, that she could have been an opening act for Jeff Foxworthy.

We have sex scenes that read like this:
When he sucked her nipple into his mouth, he made an mmmm sort of noise, as if he'd just taken a mouthful of pecan pie with whipped cream. He certainly knew how to do this part right - exactly enough pressure to send a signal down below, where the welcome party was being set up. Soon that welcom party would be in full swing, ready to greet the honored guest.

"Welcome party," eh? I guess that would make the condom the balloons?

It almost makes you nostalgic for Bertrice Small's "love grotto."

For a nerd, Jack just isn't very nerdy. His inner dialogue is airheaded and he comes off sounding like a cross between a thirteen-year-old boy and a sixteen-year-old girl. When he's not thinking about sex, he's mentally cataloging everything the heroine is wearing and saying things like "omigod!" We're told that he's a brilliant programmer, but never really see any of that in the book. Instead, we're told that he has a home gym because he's too socially awkward to go to the regular gym (because he needs a hot body to appeal to the heroine), and instead of playing video games, he plays flight simulators (because anything else would be *too nerdy*), which is how he's able to land the plane...

He's also...kind of a jerk. He makes so many judgments about Genevieve, and the fact that he is so desperate to reclaim Nick's sloppy seconds really put me off his character. You'd think he would warn her or something, you know, since he's such a nice guy. Then we have this dubious line:

He wondered if the bathing suit was a signal that they wouldn't have sex anymore. If so, it wasn't a very good signal, because those little scraps of material would come off in no time. He'd always thought that was the idea of a bikini - gift-wrapped sex.

That sounds kind of rapey to me. How easily clothing comes off is not a substitute for vocalized consent. And the purpose of a swimsuit is for swimming, obviously. Otherwise it would be called a sexsuit, Mr. Genius Nerd.

The plot is padded out further with a subplot where Genevieve's mother teams up with Jack and Gen's boss to find the plane and save them, with the help of Gen's younger brother, Lincoln. We also find out that Genevieve and her family have psychic powers for some reason, and the sole purpose of these powers is to provide an explanation for how Annabel and Lincoln "just know" exactly where to find Jack and Genevieve without actually looking very hard.

NERD IN SHINING ARMOR was a disappointment. I was hoping for a story where the heroine embraces the nerdy hero's nerdy quirks, and instead found a book where nerds are put down, and it's only when they're transformed to fit acceptable beauty standards that they're found worthy of being love interests. The idiotic villain, numerous deus ex machinas, and unlikable characters were just nails in the coffin. NERD'S one saving grace is that it is compulsively readable (like watching a plane crash), and saved me from being bored during my lunch hour or while waiting between various appointments. But sadly, that wasn't enough to save its rating.