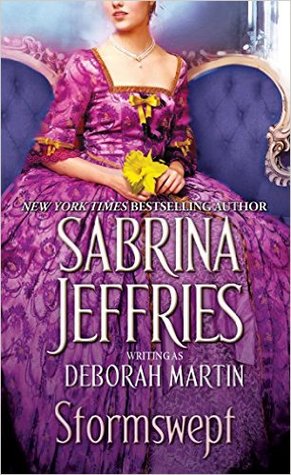 This is a rerelease of an older title written by Sabrina Jeffries under the psuedonym, Deborah Martin. Usually, authors use pseudonyms when they're writing in a different genre - either to test a fresh, unbiased fanbase or to keep their books organized by genre. I'm not sure what the purpose was here, but it's interesting to think about.

STORMSWEPT is a historical romance novel set in Wales. The heroine, Juliana St. Albans is the daughter of a powerful lord who has just seized the property of a Welsh squire in a gambling debt, causing the man to commit suicide in his shame. Rhys Vaughan is the son of that squire, determined to get revenge on the St. Albans.

One day, Juliana attends a meeting of Welsh radicals in disguise with her Welsh servant, Lettice. Rhys is one of the speakers, and his intelligence and charisma rallies those assembled. He sees Juliana in the audience and is immediately attracted to her, and impulsively kisses her without knowing who she is, although others are quick to enlighten him. After a surge of anger and a brief misunderstanding, he decides he wants her instantly.

Juliana's brother, Darcy, is furious when Juliana and Rhys elope - even more so when he finds out that Lettice, whom he covets despite being married, is in love with and plans to marry another Welshman, Morgan Pennant. With the help of Juliana's brother, Overton, and a host of other people, Darcy gets Rhys and Morgan impressed in the British Navy, where they are whipped and flogged and forced to fight in battles they have no investment in. Darcy then takes on grieving Lettice as his mistress while Juliana, thinking that Rhys meant to betray her and steal back his land, eventually gives up her husband for dead and takes on a new suitor at the behest of her family (i.e. Darcy).

Everything is fine and dandy...until Rhys returns, back from the dead.

My friends loved this book, and their high praises were a huge factor in why I applied for this book on Netgalley. Now that I've read it, I can see why it was so popular with them. Juliana is a great protagonist. She doesn't take any guff, not even from the love interest. It was refreshing to see a heroine who actually stood up for herself, who was intelligent and kind, and who didn't make stupid, selfish decisions (although there was someone in this book who did make stupid, selfish decisions *cough* Rhys and Darcy *cough*). Juliana was a huge factor in my liking this book.

The quality of the writing was also quite good. I loved the writing, except for the sex scenes, which were mildly cringe-worthy. "Honeypot" should never be used in descriptions of intercourse, ever.

No, my beef with this book is actually the hero, Rhys. I hated Rhys. He was such a selfish, arrogant, stubborn jerk. The lust-at-first sight was bad enough, but then he follows her home, sneaks into her window, and pushes her into eloping by compromising her step by step. Then when he finds out she's planning on marrying someone else, he goes apesh*t. The way he treated Juliana was awful. He takes control of her estate and says she can't have it back until she sleeps with him. He accuses her of being a liar at every turn, and doesn't believe a word she says unless someone mansplains it back to him on her behalf. And, oh, yes, he keeps trying to figure out how to have sex with her without forgiving her.

I wouldn't have a problem with a jerk hero if it weren't so blatantly obvious that we're supposed to feel sorry for him, and the hero does remind us what a victim he is, whining and looking hurt (only when no one is around to see, of course), and generally sulking while expressing his fear of abandonment. Well, I'm sorry, but I felt no pity for this piece of work. Juliana sets him straight on this, and I half-wish she'd married Stephen instead of him because it takes the hero thirty pages from the end before he finally - finally - realizes he was wrong. And it literally takes a declaration from Juliana's brother, a big fat, "I DID IT!" in blinking neon lights, before he does this.

Lettice and Juliana and Morgan were awesome, but Rhys and Darcy are free to go to the devil any time.