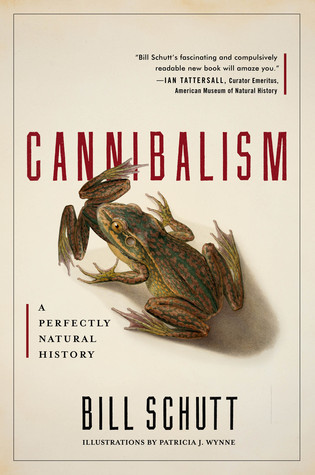 I blame Bill Nye for fostering in me a fascination with all things science (something I think he'd gladly take the credit for). Romance novels might be my one true love, but pop science nonfiction is the other woman, my secret mistress, the one I keep coming back to again and again on the sly.

I was trying to talk about why this book is so good, but my friends and family were having none of it. So instead, I'm going to talk to you, my delightful captive audience, and let me just warn you right now that if the thought of reading about people eating other people squicks you out in a major way, you might want to consider hitting the "pause" button and exiting stage left.

Don't say I didn't warn you!

P.S. In case it weren't obvious, seeing as how this book isn't published yet, I received a copy of this to review honestly from the publisher + Netgalley.

CANNIBALISM: A PERFECTLY NATURAL HISTORY is written in the style of Mary Roach. What I mean is that it's a mixed bag of anecdotes, ranging from the scientific to the pop-cultural, with a lot of (interesting) tangents. The author has a wry, tongue-in-cheek sense of humor that keeps rearing its head, but sometimes he'll get too caught up in the subject to be funny, and this variance in tone is a bit jarring.

The prologue opens up with some examples of cannibalism that are readily accessible to the public: Hannibal Lecter, and the inspiration behind him: Ed Gein. After a compelling introduction, Schutt launches into cannibalism in the natural world. Birds eating the eggs of other birds. Spiders and praying mantises eating their mates. Tadpoles eating other tadpoles. Sharks eating their fellow baby sharks in utero. Cannibalism is rarer in mammals, but there are examples of it, especially when said animals are overcrowded and over-stressed (think hamsters).

Next, he talks about cannibalism in ancient history, like in cave people and dinosaurs. It's more difficult to prove this, because there are so many variables that you can't control for, and I think these chapters were fascinating because they really show how much detective legwork archaeologists have to pull in order to give us science.

Two historical accounts of cannibalism really stood out to me and that was 1) Queen Isabella issued an edict saying that only New World peoples who were uncivilized and/or cannibals could be enslaved, so Columbus and his men intentionally and wrongfully labeled many island tribes as "cannibals" so they could be enslaved and sold, and 2) George H.W. Bush was the only man in his group to survive being eaten by an isolated, starving group of Japanese men during WWII, in what came to be known as the Chicijima Incident.

The last couple chapters were about prion diseases, which I actually knew a lot about because I read this great medical mystery on the subject a few years ago. It's called THE FAMILY THAT COULDN'T SLEEP and it's about Creutzfeldt-Jakob's disease, scrapie, kuru, and spongiform encephalitis, and how they are all linked (spoiler alert: cannibalism). Schutt interviews some of the scientists who pioneered this research and some who are continuing to develop it, including one woman who believes that these diseases might be caused by a sneaky virus, and that the malignant proteins are just symptoms to an altogether more sinister cause.

If you are interested in science books and have a strong stomach, I heartily recommend that you read CANNIBALISM: A PERFECTLY NATURAL HISTORY. It's a fascinating and balanced look at a taboo subject, and I learned a lot about so many things I am now kind of wishing I hadn't.

Read it. I dare you.

Email ThisBlogThis!Share to TwitterShare to FacebookShare to Pinterest
Labels: from netgalley, nonfiction, science