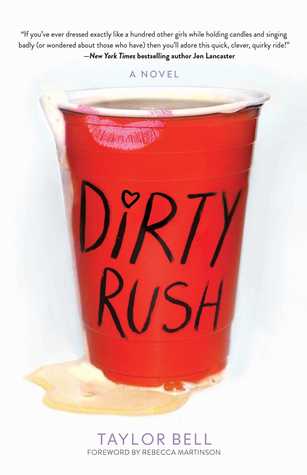 I used to joke that I was technically "Greek" because I was in a society (a lot of societies have Greek names, too) - in fact, I was offered membership to two. But I never rushed, and I didn't have any friends who were in sororities. Ever since I saw Legally Blonde, I was fascinated by sororities. They seemed so girly and decadent and shallow, like a sleepover with Kelly Ripa.

In other words, awesome.

DIRTY RUSH is probably not a realistic portrayal of what sororities and fraternities are actually like, any more than 80s movies by John Hughes were accurate portrayals of what high school was actually like. But it does manage to capture the "spirit" of what many of us wish it was like, which is almost as good.

Especially for those of us, like me, who can only participate in these kinds of events vicariously. This is prime entertainment.

DIRTY RUSH is the trashiest thing I've read in a while. Parts of it made me angry. I didn't like how they referred to the alcohol as "rape juice" or that they used r*t*rd and autistic as insults. But there were surprisingly good parts, too. Like the acceptance of gay fraternity members, some truly loyal sorority sisters who stuck by Taylor no matter what, and Taylor's relationship decision at the end. If it weren't for the stilted dialogue and choppy transition scenes, I think DIRTY RUSH would have been an edgier, soapier version of Diana Peterfreund's Secret Society Girl series.

Yes, I actually liked this book. I know, I'm as surprised as you are.