How Not to Fall by Emily Foster 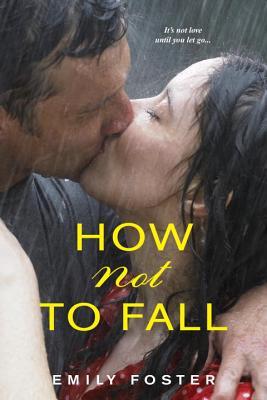 Erotica is a tricky genre for me. I know what I like & I know what I don't, and first and foremost, a work of erotica has to have good writing and a decent story. Some people can enjoy smut for the sex scenes alone - not me. Plot, or GTFO.

HOW NOT TO FALL is one of the better new adult/erotica works I've read over the last five years. It would probably make my top ten list, and would definitely make my top twenty. The writing is great, the sex scenes are great, there's dialogue and character development, the characters are both intelligent, and the author really makes a point of putting emphasis on consent.

Can I take a moment to appreciate that, actually? Because I feel like there's a belief that talking about consent is unsexy for a lot of people, in the same way that talking about contraceptives is. That it's a "mood-killer." Well, Foster shows that this doesn't have to be the case. Contraceptives AND consent are both discussed, and in all sexual encounters, both characters are enthusiastically consenting and I think that's great.

Moving on - with some mild spoilers (readers beware).

Annie works as a research assistant, and is preparing a mock dissertation before going to med school. The only problem is, she's fallen for her post-doc, British accent and ugly Oxford shirts and all. After an awkward and bumbling start, she's delighted to find that he feels the same, but he agrees to the relationship on the condition that she wait until after classes, when he's no longer officially her adviser and has no power over her grades/lab hours/etc.

What follows is a lot of sex, but it's not mindless. Annie and Charles learn many things about one another, some of them charming, some painful. They engage in some light bondage, which raises further issues, like the importance of consent and the consequences of emotional surrender. This sharing creates an intimacy that comes dangerously close to love, which could lead to heartbreak because neither plan on giving up their plans for the other. Other topics of note are privilege (which was actually very mindfully done, with a self-awareness that escapes most new adult characters), obligation, self-care, love, relationships, and psychological well-being.

I started out this book with low expectations, which was a good thing because it meant that this book totally blindsided me with its awesomeness. There was a point where I thought for sure that HOW NOT TO FALL would get five stars, but it has some issues that were a bit troubling.

First off, what I liked:

Annie. She's a great heroine. She actually reminded me of me in many ways, which is great, because I don't often see heroines who remind me of me. Many people said that she was immature and naive, but that's how I was as a college student; and the way it's portrayed here is very realistically done. She wants to change the world and believes she can because she's never failed at anything in her life. She believes she can change Charles, too, and it's a little heartbreaking when she realizes she can't.

Charles. He's a dominant hero done right. I will admit that I liked him a little more in the beginning than I did towards the end, because I feel like the author jumped the shark with regard to his character development. But I loved his intelligence and his resolve and his control, and his determination to be a decent human being, even - especially - when it wasn't easy.

The sex scenes were very well written, and not at all silly. Even when there were things that I didn't personally like, I never cringed or felt grossed out. Foster is a good writer and knows when to describe and when to leave things to the reader's imagination.

I didn't see the point in making Charles minor nobility (I mean, just because he's English...?) or of giving him a dark and tormented past. Part of what made this book fall in my eyes was the decidedly FSoG turn it took in the second act. Charles's insistence at being in control in all things (not in as many words, but he is pretty controlling in a "for your own good" kind of way - and it's essentially chalked up to noblesse oblige), the suggestion that his childhood and bad parental figures made him this way, and some of the things he does to Annie were highly reminiscent of FSoG. He even gives her a first edition of an old book that she likes as a gift!

I think there were also too many sex scenes. There was a tipping point where the sex scenes began to overtake the plot, and I'll admit to skimming a couple of the more redundant ones in the second act. They were all incredibly well written, but after a while it got a bit dull seeing the two of them using sex as a way to deal with whatever emotional hashing out that they were going through at the time.

Also, Annie is - spoiler - a virgin, and she pretty much becomes a sexual pro right off the bat, having multiple orgasms at the drop of a hat, not feeling any awkwardness or pain or discomfort, and just in general being Queen of the Sex Fairies whenever her clothes come off. I know that's a trope that annoys many people on my friends list, so be forewarned, it's in here.

Charles is also a bit affected. At times, his speech got to be a little irritating. It didn't bother me that much because I knew people who talked like this in college because I hung out with a bunch of highly affected nerds, but if it got too much for me, I know it'll REALLY irritate people who don't like pretentious intellectuals. So keep that in mind. There are pretentious intellectuals in this book.

Overall, though, HOW NOT TO FALL was a really great read. I'm grateful to the author and to Netgalley for providing me with a review copy because it's not something I would have picked out for myself. In fact, I came very close to not reading this book at all! Boy, am I glad that I did.

Is it December, yet? I need the sequel ASAP.