Beg for Mercy by Jami Alden 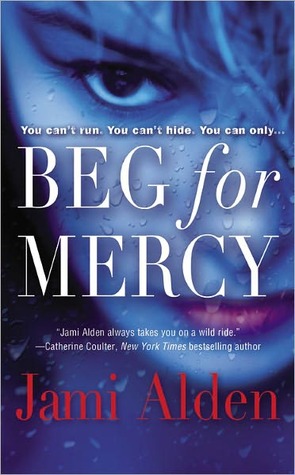 I remember when I first started getting into romances, I asked my friends for recommendations and Louisa recommended a couple romantic suspense authors to me, including BEG FOR MERCY by Jami Alden. The Criminal Minds comparison sold me on the story. I don't know if you've seen Criminal Minds, but that is some scary sh*t.

BEG is about Megan Flynn who is sort of dating/sort of in love with this cop named Cole Williams. When they're getting frisky, he gets a call about a murder, and Megan is shocked to recognize her own address. Without warning, Cole arrests Megan's brother, Sean. The open-shut case means her brother's death sentence, and Megan loses all credibility as everyone thinks she's crazy to insist he's innocent.

While reading this book, I kept thinking about what I would do if I was in this position. I can't even imagine what it would be like to see a family member arrested for something you know in your heart that they didn't do, but be utterly powerless to protect them from the law. It made my heart hurt.

I have to say that I didn't particularly like Megan and Cole much, though. While I could understand where Megan was coming from, I thought she was an idiot. She was always marching into the face of danger, to the point where she could have been hit with obstruction of justice charges. Did that stop her? Nooooo. She was emotionally manipulative, impulsive, and bitchy, and I did not like that at all.

Cole, on the other hand, is your typical alpha male jerk, who's just a few steps away from peeing all over the heroine's shoes to mark his territory. Every time another man so much as looks at Megan, Cole thinks about how much he'd like to punch that man in the face. The macho bro-standing got old fast, and so did his judgmental attitude. At one point he says that Megan looks like she's gotten her clothes from "Sluts R Us." Nice, Cole. Very nice.

The two of them use sex to manipulate one another and get their way, and I thought that was pretty awful, too.There's nothing really romantic about this romantic suspense, please and thank you.

The suspense aspect of this book is really well done and makes up for the crummy characters. The serial killer in this book is super creepy. What's even creepier is that you almost feel sorry for him when you find out what he went through - almost. (He's still a major psycho, though.) I was able to predict (correctly) who the killer was about 25% in because the red herring was way too obvious a choice.

BEG FOR MERCY was a fast-paced read. I'm interested in reading the sequel. From what I read in the teaser at the end of BEG, it looks like it builds upon the previous events and relationships, which I always like in a story, as it makes it way more complex and interesting.