He Will be My Ruin by K.A. Tucker 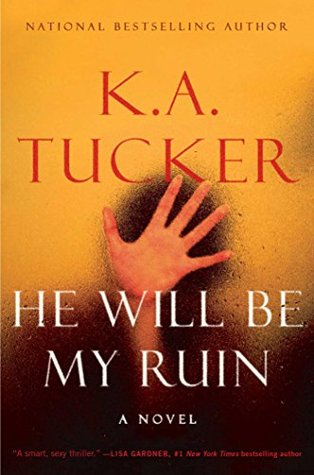 I liked this a lot more than I thought I would. Flawed, but a definite improvement over this author's earlier work.

Maggie Sparkes is a super rich heiress who works in nonprofit. When she finds out her childhood friend/the daughter of her maid is dead, supposedly by suicide, she jets out to New York. No way Celine killed herself, Maggie cries to anyone (and I mean anyone) who will listen. But fear not! Detective Dip is on the case, and she's bought friends. She immediately starts going through all of her friend's things and finds items that...disturb her.

For the first 60% or so, this book has a definite IF I WERE YOU vibe. Maggie discovers a notebook in which her friend lists all of her sexual adventures before she died. She starts taking up with the man who might have killed her friend. She wears her dead friend's clothes and lives in her apartment. It's very awkward.

Is this a rip-off of IF I WERE YOU? No. They're very different stories. IIWY was erotica with a mystery thrown in. HWBMR is a mystery with some erotica thrown in. The focal point of this story is the mystery, and I was pleased to see that when it came down to brass tacks, the heroine was more interested in getting closure than sleeping with the hot, potentially murderous dudes (eventually).

At the 60% mark, the pacing picks up dramatically. Instead of slogging through tedious descriptions of Maggie attempting to play Nancy Drew/Gossip Girl, we're presented with even more subjects, interesting evidence, and some truly tense scenes as Celine's diary entries reveal clue after damning clue. Also, I loved the descriptions of old antiques and Chinese pottery. I actually didn't know how "new" bone china was, or how it got its name.

I probably would have enjoyed this more except for the fact that Maggie was a bland character, who didn't really have a personality apart from being rich and harboring an obsessive need to pour huge sums of money into finding out how her friend died. Why? An answer for this wasn't really provided, and I was given the impression that they were somewhat estranged.

I also thought that both she and Celine had definite TSTL tendencies. When they should have asked themselves, "Gee, maybe this person is a little too eager to install this camera into my house" or "maybe I shouldn't mix vodka and sleeping pills while in a fragile emotional state" they threw caution to the wind instead, leaving me shaking my head and muttering, "Really, lady? Really?"

HE WILL BE MY RUIN is mystery "light" with some sexual stuff thrown in. Not really my cup of tea, but I enjoyed it despite that, and found myself pleasantly surprised by this book's readability. Honestly, if you liked IF I WERE YOU, you'll probably like this, as the mystery is a lot better and it doesn't have quite as many long sex scenes. I'm not mad at it. Especially with its $1.99 price tag.

Email ThisBlogThis!Share to TwitterShare to FacebookShare to Pinterest
Labels: thriller