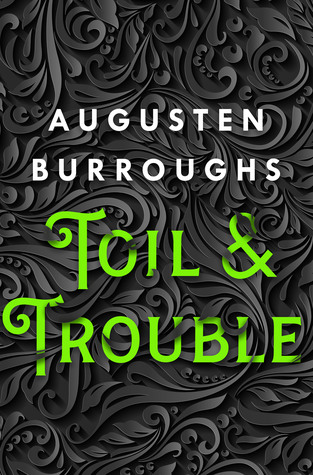 The other day at work, I was listening to music on YouTube with "autoplay" on, as one does, and because I have excellent taste in music, "Inexplicable" by The Correspondents came on. I heard the lyrics "When I was four / I raised my finger to a moving car / It crashed / So I assumed I had a super power" and I thought, my gods, this man has surely read TOIL & TROUBLE and finds it as difficult a pill to swallow as I did.

It's been a while since I've read an Augusten Burroughs book. Years, in fact. Originally, I gave this book a 4-star rating, but that's mostly because the second half of this book is much better than the first half, and I was able to forget my inordinate boredom with Augusten Burroughs' seemingly earnest belief that yes, he is in fact a real witch who makes strange things happen.

I am probably the least religious/spiritual/magical thinking individual there is. So with parts of this book there was definitely a "help! I'm trapped on a bus next to a guy who thinks he's a witch!" vibe. I think I've only felt so cornered when this self-professed Wiccan told me that she was an indigo child with mood ring eyes who could see auras, and the one time I ever went to a Unitarian church where we all "hugged the sun" before hugging each other, and I swear to you, never have I fled a place of religious worship so fast. Hugging perfect strangers after assuming an unflattering pseudo yoga pose-- my actual worst nightmares. I'll take the blood and body of Christ, thanks.

Anyway, Burroughs thinks he's a witch, and this collection of essays is intended to showcase his intuitions and the strange coincidences in his life that have made him (maybe?) believe this. I can't remember this coming up in any of the previous books of his I read-- SCISSORS, and the one about alcoholism-- so I'm not sure if he just felt too uncomfortable to bring it up before and now gives zero shits, or if this is something that he made up to delight and captivate (and, yes, sell books to) his audience. I found parts of this book very amusing-- my favorite part was probably his "I'm vegan but also eat bucket loads of non-vegan candy nightly" essay and also the essay about the truly one of a kind essay about the man known as Jeffrey, who is like if Joan Collins was a self-hating gay man.

Overall, I think TOIL & TROUBLE accomplished what it set out to do, which is to tell a series of interesting (if somewhat exasperating and unbelievable) anecdotes about a life lived with some pretty unusual and attention-catching coincidences that ended up playing huge roles in his life. Is he a witch? Well, I don't think so. But hey, if it makes him happy and it does no harm, then why not? As long as people aren't forcing their doctrines on me or using it to control or influence my life in any way, I'm perfectly happy for them to believe what they like. Whatever gives you comfort and brings you joy, yeah? And Augusten seems thoroughly delighted with himself, so good for him, I guess.