Isle of Night by Veronica Wolff 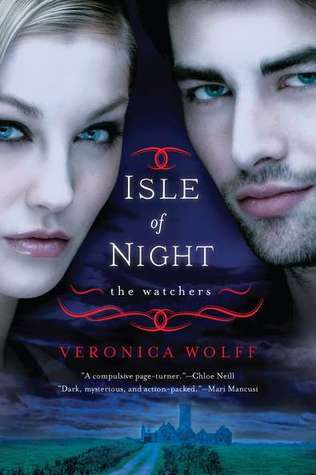 I was worried when I was skimming through my friends' reviews of this book and noticed that practically all of them hated it. The summary sounded totally awesome, kind of like a blend between The Hunger Games and Vampire Academy, which are two of my favorite YA book series, and one of the few that I've actually bothered to reread. I couldn't see how people didn't like something so totally awesome in premise... until I picked up the book for myself and saw how totally fail it was in execution.

This was a buddy read with my GR buddy Sage, who has participated in several other buddy reads with me before. The previous three we did were all really fun and I was hoping this one would be as well, but I guess this is proof that even two such amazing beings as us still can't have a 100% success rate.

In ISLE OF NIGHT, Annelise escapes her abusive family by registering herself for early admission to college because she is a certified genius, which she will remind you of repeatedly. Unfortunately, she cannot enter college because-- and this is not a joke-- she didn't pass a swim test. No swim test, no college-- I guess because they have to ensure that you can float about sea level. Get it? SEA LEVEL? Yuck, yuck...

Anyway, Annelise storms out of college and finds a hot Scottish Edward Cullen ripoff hanging out around her car who I am going to call Gerard Cullen. Gerard Cullen spirits her away to this special school that he tells her will be perfect for someone of her ~genius~ and she agrees to go off with this perfect stranger because is hot, even when it turns out the somewhere else he's taking her is a jet plane going off to some mysterious island and the only other passengers are attractive but mean girls.

Annnnnnd... that was about where I stopped reading. There was nothing but insta-lust, stupidity, girl on girl hate, and a beautiful heroine with big eyes and full lips and long blonde hair who literally lists out these qualities and says, "Oh my God, I'm so ugly, big eyes make me look like a bug and blonde hair makes me stand out," and-- once again, let me be emphatic-- this is actually what happens.

I was hoping this series would be good because the whole series is on Kindle Unlimited and for some reason I bought the first book a while ago, although I can't remember doing so. I want to kick past-Nenia in the pants for wasting her money, because it was so bad that if this had been a recent purchase, I would have returned it to the Kindle store for a refund. Just terrible. What a shame.