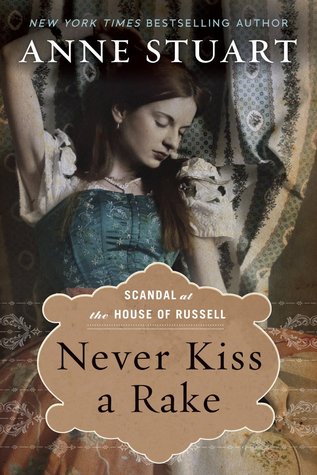 Anne Stuart is a real hit or miss author for me. She has a typical formula and sometimes employs it to great effect-- I like her heroes best when they are dark and dangerous and charming-- but sometimes she dials the formula in and the books end up falling flat because her characters feel like copies of other, better ones. NEVER KISS A RAKE is Anne Stuart doing what Anne Stuart does best, with a romance between a no-nonsense heroine and an unapologetic rake that's rooted in treachery, murder, and lies.

Bryony is the eldest daughter of the Russells, a shipping magnate who died mysteriously after embezzling from his firm and leaving all of his partners destitute-- except for one. The wealthy Irish Earl, Adrian Kilmartyn. Bryony is certain that her father was not the guilty party and figures that the Earl probably murdered and framed her father, so she disguises herself as a housekeeper and enters his household under an assumed name, determined to figure out what really happened to her father and his business, and whether Adrian was actually responsible.

She didn't plan for the fact that Adrian is attractive and charming as a young god. He and his wife are both the most beautiful people that Bryony has ever seen. But their marriage is abusive and toxic, and Cecily cheats on her husband on the reg, keeping him loyal by blackmailing him with a secret that would have the power to ruin him if it ever got out. Cecily doesn't like Bryony and is determined to do whatever it takes to get her back on the house and out of the street, and she isn't the only one. Somebody else wants Bryony gone, and possibly dead, too. Is it Adrian?

So obviously I loved this. Anne Stuart's gamma heroes are the best, and for some reason it's always her stories where the heroes might be murderers that are the best ones. The sexual tension between the h and the H were really well done, leading to some truly steamy scenes that are among her best. I also loved the banter between the two-- the pairing of no-nonsense bluestocking and  shameless rake reminded me quite fondly of RUTHLESS, which is my favorite Anne Stuart book. Adrian is much nicer than Rohan but the dynamic and personalities were a little similar, and I loved it. The book gets off to a bit of a rocky start but everything else is really well done. Can't wait to read the rest of this trilogy and find out about the other two Russell sisters!