The Spinster and the Rake by Anne Stuart 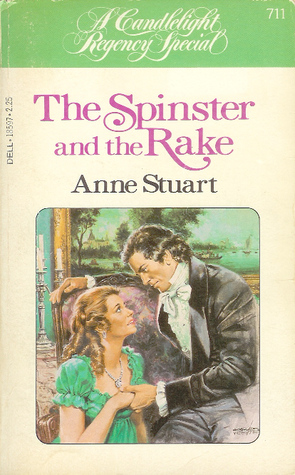 I bought the recently rereleased version of THE SPINSTER AND THE RAKE for ninety-nine cents a while ago. Anne Stuart is one of my favorite romance authors, and one of my favorite things to do is scour the backlists of authors who have been around for a while and compare their old to their new.

I guess the new version of this book has been edited and I can only assume it was to add the sex scene, which is racier than one would expect to see in one of these pamphlet-length regency novels from the 1970s and 80s, which are usually quite clean and tame.

THE SPINSTER AND THE RAKE was both hilarious and sad, because the title of this book could easily serve as a summary for the vast majority of her body of work, which tend to feature no-nonsense heroines who end up with rakes and rogues. The writing in here was very dry, lazy, and repetitive, with many of the verbal tics the author employs ("he said gently") being used to almost parodic extremes. That was the hilarious/sad part.

I ended up skimming to about 20% or so and then I read the sex scene, which wasn't good. I don't think it should have been added-- if it was-- since it doesn't fit the restrained tone of the rest of the novel and comes across as, to quote the hero, "rather ghastly." I didn't like Anne Stuart's gothic novel, BARRETT'S HILL, so I'm wondering if maybe her earlier novels just aren't for me. Shame.