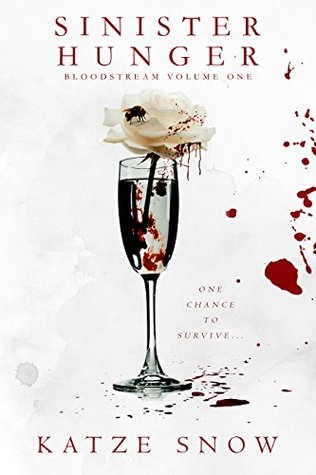 This is fine. If you know me, you know I'm a huge fan of vampire stories. Reading vampire stories, writing vampire stories-- I love it all. I don't care if the pairings are M/F, F/F, M/M, or a little bit of everything, if the story is dark enough and there's lots of biting and smut, I am a happy camper, regardless of who's doing what.

SINISTER HUNGER seemed especially promising with its very dark premise. Basically, humans live in a post-apocalyptic wasteland where the vampires have taken over and fight as Dusk Hunters (read: Slayers) to fight the nearby vampires at bay. After a massacre, the head Dusk Hunter, Vincent, sells himself to the vampire mayor, Maddox, as a blood whore to ensure the safety of his children after his wife dies in the blood shed. Yikes.

I saw another review saying that these characters don't really seem to identify as gay, and I would agree. Both of them have been with women and Vincent adamantly says he isn't gay. It isn't "gay for you" so much as "gay for revenge," which works for the storyline but maybe isn't the most sensitive re: sexuality. I know a lot of my friends on here say that the GFY trope contributes to bisexual erasure, but I'm not sure whether discovering one's latent bisexuality after sexually humiliating someone for revenge counts?

SINISTER HUNGER is pretty violent and gory. There's some very intense and descriptive scenes of beating and torture. An (I think) underage boy is molested and then raped (rape is off-screen, iirc) by one of the "heroes" no less. It's not a very sunshine or rainbows type of book, and reminded me of a slightly less hardcore version of CALL THE CORONER, another dark M/M story involving "gay for revenge," only both of those characters actually end up admitting their bisexuality.

I want to give SINISTER HUNGER a higher rating but it had some major weak points. The fight scene in the beginning went on for way too long. I know it's supposed to show how much Vincent loved his family and how much he's sacrificing, but considering how short this book is, it goes on for much too long. I felt like Vincent started becoming attracted to Maddox way too soon, and that Maddox's character was inconsistent. He seems so "nice" in the earlier chapter, and then suddenly he's molesting young boys and threatening people with humiliation and rape-- and those scenes were weird, too, because they seemed more pervy and less, "I'm a bad-ass who's going to fuck you up." I think that's why CALL THE CORONER worked where this book did not-- in CTC, both leads are fucked up and that darkness is what binds them, whereas here it's much weirder and less convincing.