The Flash of the Firefly by Parris Afton Bonds 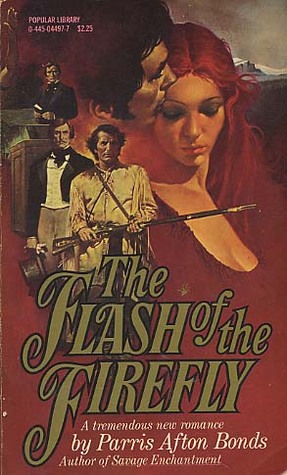 This is one of those older bodice-rippers that came out in the 1970s and man, it shows. It has all the fire and verve of goodies like SWEET SAVAGE LOVE, replete with non-con, offensive racial stereotypes, and hirsute machismo love interests who act like rape is a viable means of courtship. Truly, something like this would never get published today, but as I was explaining to someone the other day, these books provide valuable insight into changing standards within the romance industry, as well as timestamped views on women's sexuality and agency, and perceptions of people of color.

I think if you read books like these with the understanding that they are a product of their times and something to learn from and not emulate (obviously), as well as a guilty pleasure that might not be representative of your own mindset and ideology, it's possible to read books like these with a liberal twenty-first century mindset and still indulge in them. I totally understand why people aren't down with bodice-rippers, though, and the FLASH OF the FIREFLY is certainly not a book to read if you are sensitive to triggers.

The heroine, Anne, grew up in Barbados where she was raised more liberally than she was in Scotland. Her parents, despairing of the influence of the natives, are greatly relieved when a German minister marries her and then travels to Texas, promising to send for her later. Now that time is come and Anne is on her way, but the hubster doesn't bother to meet her at the dock, and she must have an escort in the name of Brant, a brutal, alpha caveman of a mercenary, who resents her presence fiercely. He's attracted to her, too, obviously, and she to him, even if she won't admit it.

Once she meets up with the group of Germans who have settled the Texas town, it seems like that should be the end. It isn't. She isn't attracted to her husband, Otto, at all and that doesn't stop him from taking his marital rights. Then her husband, adoptive daughter, and maid, as well as several townsfolk, are all slaughtered and Anne is taken captive by Native Americans, and becomes the second wife of the chief's son. Brant comes to rescue her, claiming that they're married, and marries her in a blood ceremony before fighting the chief's son to the death.

Then she's taken to a bawdhouse with Brant, where there are more jealous OWs. Brant rapes her a couple times, she decides she might be in love with him. But oh no, Otto returns to take her back and she's pregnant with Brant's baby. One day, filled with rage, and the paranoia of a cholera epidemic, Otto beats her until she runs away to miscarry in a field, before pulling herself up by her bootstraps and basically crawling back to Brant. Also, this whole time she's in love with a man named Colin who she met as a child and has put up on a pedestal all this time, but it isn't until she insults Brant yet again and gets delivered back to Colin that she realizes he isn't exactly the man of her dreams...

This book is CRAZY. The heroine tomcats around with every male character in this book, sometimes willingly and sometimes not. She also gets a whole heap of rape and abuse, which can be hard to stomach. On the other hand, the heroes all remain chaste to the heroine, caught in the thrall of her magical vagina to the point of obsession lol. It was kind of refreshing to see a heroine be the one with all the partners instead of a man for a change, although unfortunately most of them weren't consensual. That said, I really enjoyed the action and the scenery descriptions are so vivid. I haven't liked some of Parris Afton Bonds's books, but this one is almost as good as LAVENDER BLUE.

I was going to read more of this author's books but it looks like many of the ones I've planned to read were pulled off Kindle Unlimited today. If anyone wants to do another BR of her work when they go back up, hit me up and let me know. I love bodice-rippers!