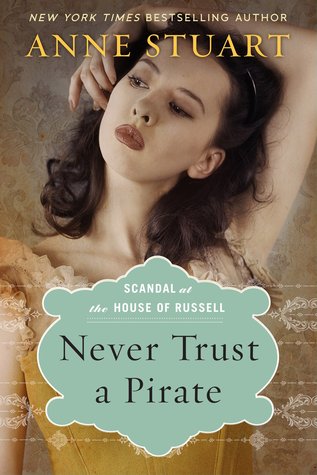 I was thoroughly delighted by NEVER KISS A RAKE; it had all the tropes that draw me to Anne Stuart's romances, and I was very eager to find out what happened in the other Scandal at the House of Russell books, to see the misadventures of the other sisters.

The premise of all three books is simple. Three sisters who are the daughter of a shipping magnate. He is accused of embezzling funds from his partners before dying mysteriously. None of the girls believe him guilty and think he was framed and then murdered to keep his silence. Before he died, Mr. Russell left behind a series of vague notes implicating various parties, and each girl has a did he?/didn't he? moment with the suspect of choice before ultimately finding out that he's innocent-- and hot.

NEVER TRUST A PIRATE has a rocky start because the heroine, Maddy, is immature and annoying. Bryony, from the first book, is much more likable because of her relatable insecurities (even if she did play the "oh god, I'm soooo ugly card" a lot) and her no-nonsense demeanor. Maddy is a brat.

The hero saves Maddy from being attacked at a dock by some sailors and then takes a kiss as his reward. Maddy is therefore shocked when she finds out that the man whose home she's infiltrated under the pretense of being a maid is the same man. Here, the book starts to feel a lot like a carbon copy of the first book in the series. There's a villain who's planning to kill the heroine; there's a jealous wife/fiancee OW who doesn't take kindly to how the hero looks at the heroine; the heroine is a housekeeper who snoops around where she doesn't belong providing the basis for some sexy scenes; and oh yes, the hero takes forEVER to realize he's in love. Spoiler: it takes murder.

Luckily, I bought all these books for 99-cents each. I would only recommend the first one but if you're curious about the rest, they are free if you have Kindle Unlimited. Otherwise, don't bother.