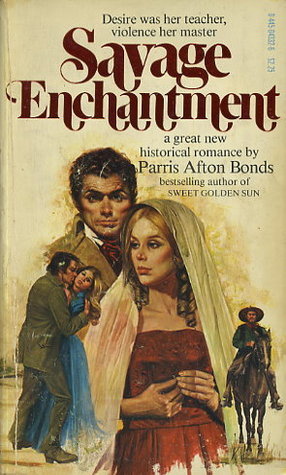 I've recently started rating some of my DNF reads 2 star because I've decided life is too short to read something boring or dull, and if I think the book probably wasn't beyond salvation, I'll give it the 2 star treatment as opposed to the "omg it was so awful I can't even" 1 star version of DNF.

Parris Afton Bonds is a difficult author because when she's on her game, I love her work. LAVENDER BLUE is one of my favorite bodice-rippers and has one of the hottest heroes ever. Like, seriously, some parts I was fanning myself and thinking, "Omg, I am deceased." On the other hand, she has works like this and DUST DEVIL where I'm just like, okay but where is this all going? In true bodice-ripper fashion, they have shocking and horrific scenes of violence and rape, but without the storyline to back it, what's the point? It just becomes mindless shock value for the sake of it.

SAVAGE ENCHANTMENT drew me because of the vintage cover of the original and the summary that promised "perverse lusts." The Kindle version of this book has taken "Savage" out of the title (I think because it was a double entendre to refer to the dark-skinned Spanish hero) and also "perverse lusts" because it turns out that was referring to someone who was homosexual, oops. Kathleen flees her gay dad who is having sex with the man he wants to marry her off to, so the two of them can split her dowry and maybe confine Kathleen to the same asylum they put her mother in (because when women cheat, it's not allowed). Kathleen flees to make her fortune and ends up in a seedy motel where she's mistaken for a prostitute and raped by the very man who COINCIDENTALLY ENOUGH turns out to be the guy who's hired her as a teacher.

The whole time I was reading this, I kept thinking that it was basically like the "diet" version of Rosemary Rogers's SWEET SAVAGE LOVE. If you're going to read one Western bodice-ripper and be offended by something, that's the one that will horrify and entertain you by turns. This one, with its odd and stilted writing, just wasn't very fun to read.