The Thousand Steps by Helen Brain 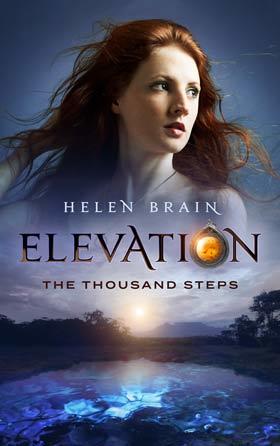 THE THOUSAND STEPS is an odd book and not necessarily one I would have picked out for myself, but I jumped at the chance to get an ARC of the new reprint because the idea of a post-apocalyptic novel set in South Africa was intriguing.

Ebba lives in an underground commune ruled over by a High Priest. They're forced to work all the time and "cull" the people who can't work or don't meet their physical standards. Ebba is about to get culled herself when the High Priest glimpses the mysterious necklace she's wearing around her neck. Suddenly, she's whisked away and presented with a lawyer, who tells her that she's actually an heiress and totes free to go, and oh, by the way, here are the keys to your plantation where you own acres of farms and servants.

Obviously, the lies the High Priest was feeding her people about the overworld being uninhabitable were just that, lies. She is pretty quick to forgive him this, though, and develops a crush on his smarmy son, Hal, who wants to marry her. Ebba's servants tell her she should avoid the whole family, but Ebba does what Ebba wants.

And what Ebba most dearly wants in this book is to be stupid.

It's weird, because the writing style of this book feels like it's for younger teens who aren't going to question subpar world-building and bad character choices. In particular, I found this author to be reminiscent of Margaret Peterson Haddix's work. But the topics-- apartheid, eugenics, cults-- are pretty mature and not really suitable for really young kids, in my opinion. I was kind of shocked about how brutal some scenes were, especially the culling in the beginning, when Ebba sees her friends die.

This isn't a bad book and I was able to finish and get some enjoyment out of it, but it's a bit sillier than I like and the cliffhanger "read more" ending didn't really impress me. After watching Ebba make so many stupid mistakes over the course of the novel, I would have liked some closure.