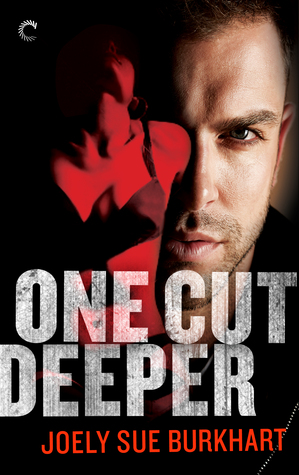 ONE CUT DEEPER is about a woman named Ranay Killian. She's a submissive and a painslut, and she just got out of a bad relationship. It wasn't abusive, but the dynamic was toxic and led her to do some behaviors that were bad for her well being. Charlie MacNiall is the attractive owner of a king shepherd who has been bringing his dog to the vet clinic where she's been working for the last year. One day, he asks her to dog sit his king shepherd, but he has an ulterior motive-- he's seen something in her that he also has inside him, and he wants to see her up close and personal.

Charlie is a sadist, and he's also been burned by past relationships. He's interested in the dark stuff, like blood and knife play, and Ranay is only too willing to play along if it pleases him, since she gets off on pain and loves the highs it brings to submission. The only problem is, her shiny new relationship might come with a dark side. A serial killer has been targeting women-- submissive women, like her-- and the authorities have reason to think it might be Charlie.

I seriously can't say enough good things about this book. It's one of my new faves, seriously.