Veil of Shadows by Jennifer Armintrout 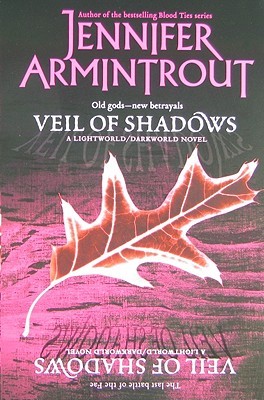 Reading these books gives me the same sense of heart-in-throat whimsical awe that I get from watching The Chilling Adventures of Sabrina, or from listening to Halestorm. It's a combination of enjoying something epic and basking in essence of girl power.

What I love most about the Lightworld/Darkworld series is that each book stands on its own while contributing to the series. As I said before in my review of CHILD OF DARKNESS, QUEENE OF LIGHT is a star-crossed love story with an underdog, and CHILD OF DARKNESS is more a tale of courtly intrigue. VEIL OF SHADOWS is a different story still: a more traditional fantasy-style epic featuring love, redemption, and betrayal.

If I told you I didn't spend most of this book figuratively gnawing on my fingernails, I'd be lying. Armintrout proved early on that she was not averse to killing off beloved characters, and unlike Game of Thrones, where you expect it and even become inured to it, with these books it always came as an unpleasant shock and never really stopped hurting. I'm still upset about the second book.

One thing I noticed some reviewers saying in their reviews of CHILD OF DARKNESS was that they hated what Ayla became and thought Cerridwen was even more annoying. I think that's fair, but Cerridwen was a spoiled and sheltered child, distanced from her parents and anxious to - literally and metaphorically - spread her wings. Her actions at the end of the second book sent a major tragedy in motion, and when we begin this book, Cerridwen is still struggling under the enormous burden of her guilt. She matures a lot over VEIL OF SHADOWS, learning not just what it takes to become a good person but also what it takes to be a good queen. It's a hard lesson, and it's meted out in pain.

Speaking of pain, let's talk about Cedric, who suffered almost as much as Cerridwen in the previous book. I liked Cedric from the get-go, because he's a master assassin and a faery babe, and that's hot AF. He wasn't a love interest until this book, and his growing relationship with Cerridwen seriously hurt my heart. There were two moments in here where I was on the verge of tears. I'm a huge fan of the tortured hero trope (see my review for THE COMPANION), and Armintrout is good at it.

Between the doomed romance, the epic battles, the creative world-building, and the court intrigue, there's just some really good scenes in here that will stay with you. My favorites were the first sex scene between Cerridwen and Cedric (even though it hurt me), and the scene when Cerridwen rides to challenge her enemy in tattered, blood-stained robes on the back of a white bull. Holy cinematic moment, Batman! I really, really recommend these books to anyone looking something different.

I'm going to go weep quietly, now. What a way to end the series.