The Hunger by Susan Squires 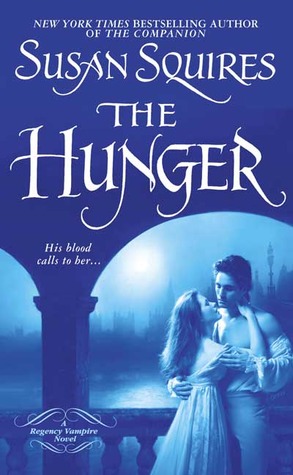 THE HUNGER is a very different beast.

The hero, John, is a spy for England investigating Napoleon Bonaprte's activities in France. The heroine, Beatrix, is a vampire who has grown weary with her life. We meet Beatrix in The COMPANION as well, but she is much more vibrant there than here. In backstories, we learn that she was basically Asharti's adoptive sister, and that their guardian was a vampire named Stephan who traversed the boundary between guardian and lover.

John is very jaded with women and thinks they're all a bunch of simpering tricksters, but is attracted to Beatrix despite himself. Beatrix finds his defiance bemusing, and sees him as a human enigma. They don't have the deep connection that the two leads of the previous book had; theirs is a physical attraction that inexplicably morphs into love when it's convenient for the plot.

There were some good portions in this book. I liked Beatrix's flashback scenes, and that scene when John is thrown on a prison boat was good. As with the previous book, the male lead is sexually abused and tortured by Asharti, which gives this vampire novel more of a horror flavor than many of its contemporary brethren. Some of the abuse scenes are very graphic. There's a final confrontation scene that's pretty dramatic, and was the only time I actually felt anxious for the characters.

I'm sorry to say that I didn't much care for THE HUNGER as a whole. I found myself skimming large swaths of it, wishing I were reading something else. It was much, much longer than it needed to be. There were definitely times when I was asking myself when it was going to end. I'm more intrigued by the sequel, THE BURNING, which no longer appears to be sold in the Kindle store. It's the only book in the series that isn't available for individual sale, and I wondered if maybe that racy and gritty summary had something to do with it. I hope not, since that's what made me want it in the first place.

Unless THE BURNING is published again, I think I might just stop at book two.