The Spoiler by Annalena McAfee 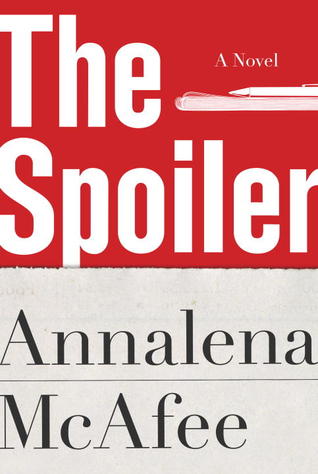 THE SPOILER is the second low-rated book I've read this week that I've actually enjoyed, which just goes to show that you can't always trust popular opinion. The other book, WE KNOW IT WAS YOU, shares some notable qualities in common with THE SPOILER, and several other unpopular books I've liked.

Here's the thing about THE SPOILER - it's not a book to read if you want all your characters to be likable, and you want to be made to feel as though all is happy about the world. THE SPOILER is a very dark book, and takes a very unflattering look at the journalism world of the 1990s. The humor is mean-spirited, and even though the writing is beautiful in parts, it's also joyless and bleak. This is not a happy story, and it does not end happily.

That said, it's one of the more interesting adult fiction books I've read in a while, which says something. The plot is actually a little similar to THE SEVEN HUSBANDS OF EVELYN HUGO. Tamara is a nobody freelancer working at a number of small tabloids. She's shocked and delighted when the editor emails her an assignment (even though it sounds boring): an interview with Honor Tait, one of the most famous and noteworthy journalists of the twentieth century, once famous, and now a grouchy recluse.

Honor was once a beautiful and brilliant young woman and now she is an old woman at the end of her career; her life has become a grim retrospective of promise and talent that has all but petered out, and with the burgeoning internet and the desperate race to get the scoop at the cost of journalistic integrity, there really isn't a place for Honor's old school style of academic journalism anymore. Nothing makes this more painfully clear than when she and Tamara meet face to face in an interview that crashes and burns, leaving both of them frustrated and angry.

Tamara is determined to get her stories, but the shifting focus of the paper is affecting her career, too. As she gets screwed over repeatedly, by multiple people, she becomes more focused and more desperate, which leads to a dark and twisted story that spirals out of control. THE SEVEN HUSBANDS OF EVELYN HUGO was a bit like this, in that it had a naive journalist participating in a biographical interview with a titan, but differs in that Tamara really doesn't respect Honor all that much and only sees her as a means to her end (the end being the story). Honor is also a reluctant participant in all of this, because she has plenty of secrets about her past that she wants to hide.

I was a bit disappointed by the "secrets." I was expecting a grand and sweeping reveal about Honor. In this, I was disappointed. Her backstory felt anticlimactic. Maybe this is something that other people who rated this book low took issue with, although the primary complaint I saw was about the unlikability of the main characters. It's true; they're both awful, but they're also scarily relatable. I think for a lot of people that's the hardest part about reading stories - reading a book about completely wretched characters and realizing that you're a bit closer to the villain than the hero.