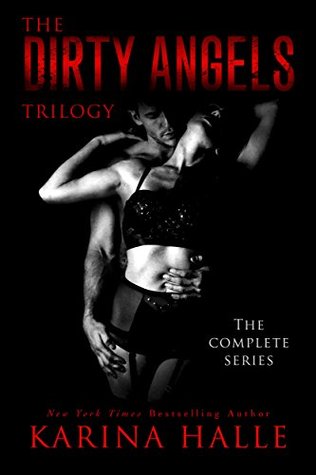 Box sets are always tough to rate. Do you rate based on your feelings of the series as a whole? Or do you take the scientific approach and average out your ratings of all the other books in the box set? I personally take the scientific approach, which means that sometimes my rating for the box sets is lower than my ratings for various books in the series. Such is the case with Dirty Angels, as there were some books I liked, and other books I thought were really lame. The quality of these stories can be highly variable.

Dirty Angels is a spin-off series about Javier Bernal from the author's other Artists series. Javier is a crime boss who deals in drugs and power. The first book is about how he meets his love interest, Luisa. The second book is a secondary romance about Javier's sister, Alana, hooking up with one of Javier's ex-mercenaries-turned-traitor. The third book is about Javier and Luisa again, only now they're married and it's on the rocks, and Javier is on the verge of losing everything due to his ignorance and pride, when one of his associates decides to stage a coup.

Honestly, this book was close to perfect. I loved the romance between Javier and Luisa, and that it grows from such a dark place. He was cruel but still human, and even though he did terrible things to her as his captive, I thought that Luisa's vulnerability and isolation were really well-portrayed. She was already a survivor of abuse and strife, so it made sense that she'd find his strength appealing. It's got a lot of violence, but it's used as a spice and not a sauce, so even though the scenes were unpleasant, the book never felt drenched with it. DIRTY ANGELS is mostly an edgy erotic romance.

I kind of hated this short story. It felt pointless and did not match the tone of the other books. Esteban is a bad man, and I did not want to read about his meet-cute with some lame artist in Hawaii indulging in cultural tourism as an attempt to cure her artistic ennui and suicidal ideation. After reading about Esteban in DIRTY PROMISES, I actually wanted to go back and deduct the half-star I'd added in my original rating to round up because I was so mad to see him romanticized. Yuck.

This was another story I didn't like. It has nothing to do with the first book - instead it's about a mercenary who's mentioned a handful of times in Artists and Dirty Angels and one of Javier's sisters, Alana. Derek is supposed to kill Alana but falls in lust with her at first sight and changes his mind literally while he's on the job. It felt way too fluffy, which was jarring after the dark tone set by DIRTY ANGELS. There's a chase scene and fight scene at the end that have more of the action I was expecting, but most of this book was pretty boring and I didn't care about either character very much.

** In between the second book and the third book, there are two excerpts for books written by the author's fellow author friends. I didn't care for either excerpt, and I thought it was kind of sneaky to put them in between the two books, as opposed to the back of the book. It felt like Halle was forcing us to page through these excerpts, which I didn't appreciate. Ads should go in the back, and we should be able to choose to read them if we want instead of having them forced upon us. #JustSaying

The most violent book in the bunch, by far. Any trigger warning you can think of, this book probably has it. The violence fits the tone of the first book and is probably realistic for this kind of setting, but it's definitely hard to read and people who are sensitive to content involving rape and gore should exercise caution when picking up DIRTY PROMISES. I was actually not displeased with how this ended the series, and thought it struck the right balance between hopeful and depraved.

Also, it addresses the events in DIRTY DEEDS, which is that Alana isn't actually dead. (I don't think this is a spoiler, since she's in the second book and people are saying it has an HEA - I mean, duh.) That was a thread I was afraid the author was going to forget about, but she didn't. Only continuity error I actually spied was that she spells Derek's name as "Derrick" in the end of this book. Whoops.

Overall, the Dirty Angels series is a pretty good set of books to read if you like dark and edgy romances that feel borderline-realistic and don't try to be too neat. The first book is the best, and I think you could honestly get away with just reading the first book or, if you're not afraid of violence, maybe the first and the third, as one of my friends advised me. The second book feels kind of unnecessary, and along with the short story, drags down the quality of the series as a whole.

I'm not mad, though.