The Companion by Susan Squires 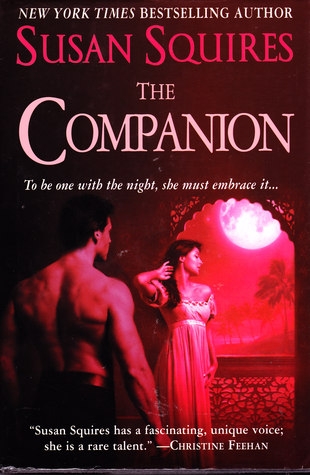 You know you've read a good book when you just want to rub your hands together and laugh once you've finished it like you're auditioning for the "world's scariest super-villain" competition. I wanted to do that with THE COMPANION, because it easily is one of the top 5 best vampire books I've ever read.

THE COMPANION is set in Egypt and England. It's about a man named Ian who is captured by pirates, enslaved, and then sexually abused and tortured under an evil and tyrannical vampire queen named Asharti. She accidentally turns him into a vampire during one of these torture sessions and then abandons him to die in the desert. Beth is the daughter of an Egyptologist looking for a secret lost city of power in the desert. When he dies, unsuccessful and out of funding, Beth is left on her own, without protection, and is forced to end the search unfruitfully and return home.

The two characters meet on a boat, and while Beth is struck by his good looks, they don't really connect until they are forced to defend their lives from yet another pirate attack. After that, they get to talking, they play chess, and they fight that damnable sexual tension. All the while, Beth wonders what it is about her new companion that makes his skin so pale, why he acts like he's got some unspeakable horror hiding behind his eyes, and why he only comes out at night.

I really can't emphasize what a good book this is. Beth is a strong character: she's intelligent, she's unusual, and she sticks to her principles. She reacts to Ian's vampirism in probably one of the most realistic ways I've ever encountered in a book. I liked that she was half-Egyptian, half English, and that her biracialism is actually addressed - also in a very realistic way - and she talks about not fitting in in either Egypt or England, and feeling too white or too brown depending on where she is. I've read books where this is swept under the carpet, so it was refreshing to see it addressed.

And Ian, oh, Ian, the shining star of this novel. He is so tortured, and a huge part of his character arc is learning to overcome that abuse. My heart ached for him, and I felt like his reactions to his abuse and his emotional responses were very realistic - so much so, that this might be a hard book to read for people who have actually experienced abuse firsthand. In the beginning of the book, he is so emotionally exhausted and traumatized that he tries to kill himself (I don't think this is a spoiler, since it happens early on), but because he is a vampire, he is unsuccessful. Beth doesn't make him forget his trauma, but he learns to accept the memories and continue living his life to be happy and learn that sex and confidence does not equate to abuse, which I thought was a beautiful message.

The vampire system was also really interesting and unique. Vampirisim comes from aliens - in a way that reminded me of Animorphs actually - and is a parasite that attaches to the blood. There's a fountain of youth in the desert that contains parasites in the water, but the way it's contracted initially here is from one of the old aliens himself, who's living alone in a tomb waiting to be collected by his brethren. It's so creepy. But you know what they say, more aliens and more vampires equals more sequels, and there are several other vampires in here who I suspect will be the focus of the next books. (Cue that gleeful, giddy villain laughter/clapping.)

I hope that I have successfully impressed upon you that you need to read this book. I was afraid nothing would be able to top my enjoyment of her futuristic romance, BODY ELECTRIC, but THE COMPANION left it quite easily in the dust.