The Authentics by Abdi Nazemian 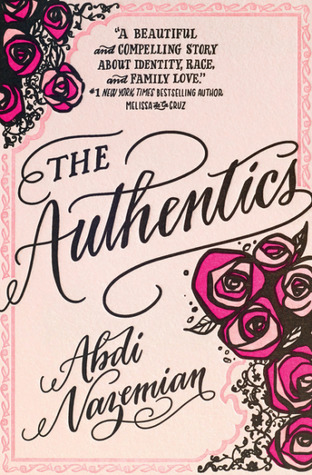 THE AUTHENTICS is a tough book to rate. On the one hand, it brings up a lot of important topics in a fairly engaging and accessible way. On the other hand, it tried to do so much in such a short amount of time, that it ended up feeling disorganized. The heroine is not the most likable of characters, and is also a drama queen and a hypocrite, so the beginning of the book is a rough ride until she gains some self awareness about 50% of the way in.

Daria Esfandyar is a fifteen-year-old Iranian-American girl who is about to turn sixteen. Her mother is planning a huge (and unwanted) Sweet 16 party for her, and inviting a whole bunch of people she doesn't like, including distant relatives and her ex-best friend, Heidi Javadi, who Daria really hates. Heidi represents everything Daria doesn't like about Persian LA culture ("Tehrangeles"), with her expensive car, designer clothes and nose job. Creatively, Daria calls Heidi's group of friends the "Nose Jobs." Daria's own group of friends is called "The Authentics," because they are so different and that makes them so authentic.

The Authentics are also diverse. There's Kurt, who is into astrological signs and who everyone in their friends group is speculating may be gay. There's Caroline, who actually is gay, and is into art. Then there's Joy, who's like a Nigerian Claudia Kishi from the Babysitter's Club, in that her sole personality trait is basically "has strict parents who don't understand her weird but stylish fashion sense and her desire to eXpReSs HeRsElF." And then, of course, there's Daria herself.

Daria thinks her problems of being different and having upper middle class culture foisted violently upon her are the greatest problems in the world, until she takes one of those ancestry tests and learns that she's half Mexican. Which means one of two things: one of her fully Persian parents isn't her real parent, or she's adopted. She ends up doing a number of questionable things in order to find out the identity of her birth mother, which ends up resulting in her meeting a stepbrother who she thinks is cute. Oh no. He takes her existence with an entire container of salt and thinks she's cute too and they end up dating and he also helps her get closer to his stepmom, which is ten kinds of awk.

Additionally, Daria has a gay brother who is married to a Chinese man, and in a move that mirrors Daria's own parental angst, they decide to have a surrogate birth the child with Andrew's DNA. This means that Andrew's parents are in town to visit their granddaughter, which results in all kinds of cultural clashes with Daria's parents as they proceed to commit as many cross-cultural faux pas and veiled insults as possible, providing uncomfortable evidence that racism is not just for white people.

There's a lot going on in this book and there's a lot to unpack. As I said earlier, I think this book tried to do some good things. There's a bit in here about the Iranian revolution (although if you're interested in learning more about that, you should probably check out PERSEPOLIS). The girl on girl hate is addressed, and Heidi proves to be a much more complicated and interesting character than the Mean Girl she was being built up to be in the beginning of the book. She also checks Daria on her hypocrisy and slut-shaming, which I appreciated. THE AUTHENTICS has many dialogues about family, blended family, identity and ethnicity, as well as stereotyping and racism (including stereotyping and racism that occur within the more broadly sweeping "people of color" group).

I think the book might have been better without all the forced-romance, especially since it didn't amount to much. The stepbrother angle also made it feel kind of creepy (which is addressed in the book by multiple people, thank God, so I didn't feel like I was going crazy). I was also confused about the results of Daria's ancestry tests. My copy is actually an ARC that was given to me by a friend, so I'm not sure if this made it into the final cut, but in the ARC, Daria finds out that she is half-Mexican, half-Persian from the test results. The person revealed to be her father was not Persian, if I remember correctly (I believe he was white and Jewish), and her mother was fully Mexican, so where did the Persian come from? Was that a mistake? Did it transfer via osmosis? (Kidding.)

Overall, I did like THE AUTHENTICS but it didn't feel very realistic and the ending was too neat. It kind of felt like it was trying too hard to be quirky and different, and even though I liked how the cast was mostly fleshed out instead of just acting as name-dropped diversity tokens, there were still a couple main characters (especially Daria's friends) who fell flat on the pages. I didn't dislike this as much as some of my friends did, but it's definitely an imperfect book and feels like an unpolished debut.