The Bride of the Unicorn by Kasey Michaels 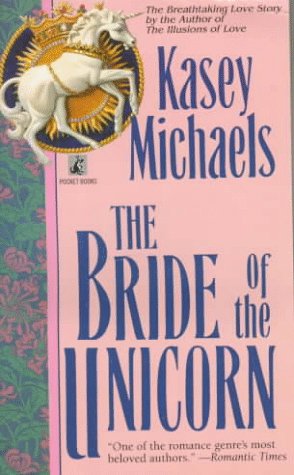 THE BRIDE OF THE UNICORN had the makings of a good novel but sadly, I couldn't get into it. I made it to nearly 75% of the book, and then I decided to skip to the end. The beginning is amazing - a cruel nobleman makes a deathbed condition to his cousin, a marquis. He tells his cousin that he was party to the destruction of a young heiress whose family was murdered and her title snatched.

Skeptical, Morgan (said marquis) begins a search that ends up taking him to a madhouse. There he makes the acquaintance of the plucky orphan, Caroline, who's skilled in infirmary work and thieves' cant, but not much else.

Caroline agrees to go with Morgan to learn how to be a lady, but that means that Morgan has to bring all of her friends with him, including a crazy old lady named Peaches O'Hanlan, a delusional old lady who's obsessed with Don Quixote and chivalry, and a crazy young dwarf named Ferdie whose father abandoned him in the asylum on account of his dwarfism and who often speaks in rhyme.

As I said, I liked the beginning of the book, but it quickly began to fall apart. The writing of this story isn't bad, but I felt like the tone was inconsistent. The murder plotline was dark and I felt like it should have been incorporated more thoroughly into the story with more angst; having it be a light-hearted book kind of trivialized Caroline's tragedy, which brings me to the second problem.

There were too many damn sidekicks. I like a good secondary romance and underdog story as the next girl, but you know your romance novel is in trouble when the hero and heroine are constantly having to fight for page space from the many grasping hands of numerous (and irritatingly quirky) sidekicks.

A good idea was buried somewhere in here, but it was very poorly executed.