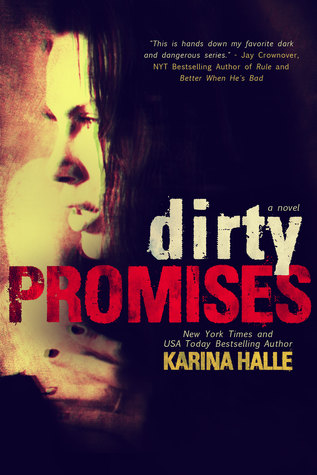 "The real cartel life is not pretty, not easy and certainly NOT romantic and that is more than reflected in Dirty Promises."

You know, I kept coming back and looking at the Goodreads blurb while reading this book, and thinking about those words, "The real cartel life is not [...] romantic and that is more than reflected in [these books]." I asked myself, "Is it, though? Is it?" I mean, the Dirty Angels series are romances, they're tagged as romances on Amazon, and they (sort of) have HEAs. Worse still, she wrote a meet-cute story for Esteban, which is included in the box set version of these books. Esteban, who ends up being such an Evil McBad that he could double as a Bond villain, or land a supporting role in American Psycho as Serial Murderer #2.

I have a lot of mixed feelings about the last book in the Dirty Angels series. A lot of my friends didn't like it, and some of them even came onto my reviews and status updates of DIRTY DEEDS and DIRTY PROMISES to warn me about what I was getting into. Ultimately, I think I ended up liking the book more than they did, but I think that was partially due to the warning, and I assumed the worst as a result.

DIRTY PROMISES is a disgusting, evil little book that jumps the shark fifty times before diving back into a sea of blood, torture, and rape. The progression of this series is truly odd. DIRTY ANGELS was a pretty straightforward captor/captive romance with a few gruesome scenes at critical points to drive home certain character elements or plot points, but it's like the author looked at the reviews where people took issue with that violence, and thought to herself, "OK, I need to tone it down." So she wrote DIRTY DEEDS, a romance about two secondary characters only peripherally related to the series and not really about Javier at all. Apart from the hero originally having the heroine on his hit list, it's basically your ordinary new adult romance about a muscular bad boy who hooks up with a good girl from a bad family, and all the people trying to keep them apart. But then, again, it's like the author looked at the reviews saying it was too fluffy, and thought to herself, "OK, I need to make the series a total horrorshow and throw in lots of rape, because that's what the people want!" And then she wrote, DIRTY PROMISES, I guess, to show that she keeps her promises.

DIRTY PROMISES is about Javier and Luisa again, which makes the first and last book a duology if you cut out the middleman. After the "loss" of his sister, Javier has gone a little crazy. In books .5-2 of The Artists trilogy, he was a smooth criminal. In book 3 of The Artists trilogy, he comes off as an incompetent coward. In book 1 of Dirty Angels, he comes off as a suave sociopath. In this book, I don't know what he is, but I didn't like it. He's constantly cheating on Luisa, which doesn't really feel realistic, seeing as how he gave up some of his ways to be with her in the first book. Now, he's decided that he needs to push her away. In the meantime, he's torturing people for the fun of it because he says it gets him off. In case that wasn't bad enough, there's Esteban, who is planning on staging a power coup and taking the cartel - and Luisa - away from Javier.

Anyone who tells you to be careful with this series is right. The first book was pretty tolerable except for an abuse scene that was pretty bad and a torture scene that was worse. This book has multiple rape scenes and very, very, very graphic torture scenes. The sex scenes that are consensual are disturbing, with blood play, weapons being used as sex toys (as in DARK PARADISE), and at one point, a threesome that is used much like Hamlet's play was: to force a confession of infidelity. Readers may also take issue with the fake that one of the villains is coded as being bisexual, even if he says he isn't gay. The way it's written kind of feels like his sexuality is being used for shock value, and while that's the status quo with most of these characters and their bizarre fetishes, it can get into shady territory when orientation is involved. Anne Stuart's INTO THE FIRE does something similar.

DIRTY PROMISES ends the series in a much better way than BOLD TRICKS did, and I do think it brings both closure to the series and Javier's character arc full circle. I understand why people liked this book and I understand also why people didn't like it; both groups have their points, and it really depends on which side of the whole "sexual and physical violence used for titillation" fence you fall on. I read a lot of bodice-rippers and horror, so the scenes didn't bother me as much, but there were still several parts where I decided to put the book down and take a break because it was getting too dark. Ultimately, I did like this book, I think, but I probably wouldn't read it again...