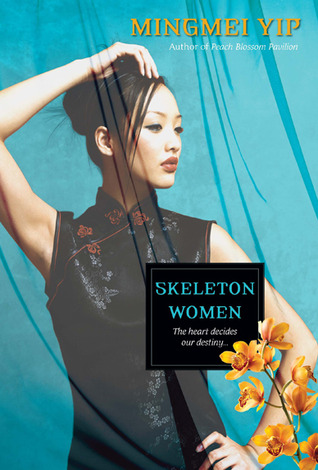 SKELETON WOMEN is a book I've had my eye on for a while and bought only recently when the price dropped to $1.99. The title comes from (allegedly) the Chinese word for "femme fatale," or skeleton woman, which is a deadly woman whose touch literally kills men (i.e. turning them into skeletons). SKELETON WOMEN is about three "skeleton women," Camilla, the heroine, who is a singer and contortionist; Rainbow, a queer and cross-dressing woman who is a reporter; and Shadow, a stage magician and Camilla's top rival.

Set in 1930s Shanghai, SKELETON WOMEN focuses on Camilla's secret role as mistress to one of Shanghai's biggest crime bosses, Lung. Camilla is actually a spy put in Lung's household by another rival crime boss named Wang, who saved Camilla from being an orphan and expects Lung's death in return. She's Lung's "lucky star," and he's sort of in love with her, but unfortunately so is Lung's son and bodyguard, which makes her cover extra precarious, because it's just more to hide.

I wanted to like this book a lot more than I did. I'm a sucker for historical fiction revolving around intrigue and the idea of a woman being a mistress to a crime boss is a topic that's still heavily explored in new adult romance to this day, so obviously that's a topic that hasn't been tapped out. Most of those are self-published and I'm not crazy about them because they tend to be characterized rather shallowly and have stilted writing, but then, SKELETON WOMEN was traditionally published and had those same problems. I'm not sure if it's because Camilla was so emotionally removed as a character of it was just bad writing, but I'm leaning more towards bad writing because of some of the truly odd descriptions and writing choices that were made by the author in this book.

I skimmed to the end, not really engaged but invested enough that I wanted to see how everything panned out. I think people who like those new adult mafia books might like this more than I did. It's definitely got some shocking and edgy scenes. Lung allegedly fed his previous mistress to tigers and at one point Camilla ruminates on all the methods of traditional Chinese torture she might face if she's caught out. She also attempts to commit suicide after watching Madame Butterfly, a scene made (perhaps unintentionally) more chilling by how rote and unemotional it is in the text.

I think this could have been a really good book if the writing hadn't been so clunky and more of Camilla's character was allowed to shine through the pages. But again, I'm not sure if that was intentional, since I know how emotion and individuality is expressed can vary across cultures, and I wasn't sure if maybe this was an intentional move that I didn't get due to cross-cultural differences. It was an interesting effort and others may enjoy it more, but it wasn't really my cup of tea.