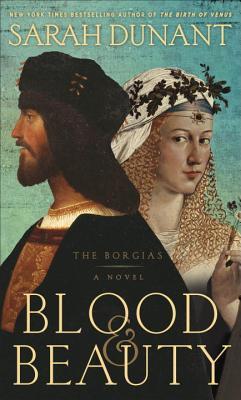 I actually received a copy of this as an ARC seven years ago, but I didn't finish it at the time. Clearly, this is proof of how much 30-year-old Nenia's taste has evolved from 23-year-old Nenia's, because 30-year-old Nenia thought this book was quite fine indeed. In fact, I'd totally recommend this book to those of you who have just finished Game of Thrones and are asking yourself, "What next?" because of all the sex, scheming, intrigue, and general fuquery that goes on in these 500-something pages. Best of all? It's true -

The Borgias are a much-maligned family and proof of what can happen when history decides to turn on you and make you into a scapegoat. The opposite is also true; just look at what history did to Christopher Colombus, turning a homicidal and delusional moron who perpetrated mass genocide against people of color into a nation's hero. In the Borgias' case, they became known for incest, poisoning, and debauchery, and were notorious in an age of notoriety.

I thought Sarah Dunant did a really good job bringing the Borgias to life and turning them into three-dimensional beings. If you have ever watched the show, The Borgias, this book is a lot like that. Alexander Borgia became Pope in Italy, despite openly flaunting his mistress, being of Spanish birth, and having bastard children (for whom he then used his churchly powers to advance). Cesare, his most famous son, was a brilliant military strategist until he went mad from syphilis (which he may have tried to treat with quicksilver, or mercury, steam baths). Lucrezia Borgia had three husbands before she was even in her mid-twenties, and for a short stint, even resided in a nunnery.

Alexander had two other children, Juan and Jofre. Jofre was a childish king married to a woman of great beauty (Sancia), and Juan was a more flamboyant and assholish version of Cesare, and flashing his womanizing and ill-gotten jewelry around to the wrong crowd ended up getting him stabbed and tossed in a river. History doesn't talk about these two as much, so it was interesting to learn about Alexander's other two children and their relationships.

Dunant actually does raise the matter of the potential incest between Lucrezia and her brother, and Lucrezia and her father. In this book, Dunant decides to make Cesare very jealous of Lucrezia, and at several points he does actually try to put the moves on her, giving this book a distinctly FLOWERS IN THE ATTIC vibe. His jealousy is also what leads him to kill Lucrezia's second and most beloved husband, Alfonso. Her relationship with her father is less uncomfortable, but there are still several moments in this book when he looks on her as a father probably should not look upon his daughter.

BLOOD & BEAUTY takes a while to get moving, but once the action starts, it doesn't let up. I'm not 100% sure how historically accurate this all is, but it was a lot of fun to read and see a different take on one of history's most notorious families. Looking at the names and events in this book, I wouldn't be surprised if George R. R. Martin borrowed from the Borgias as much as he did from the War of the Roses, because there are too many similarities to ignore.