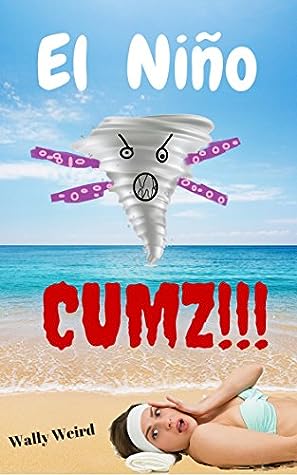 I can't believe that this was published all the way back in 2016 and doesn't have ANY reviews? Huge thanks to Caitlin for recommending this book to me for my What the Actual Fuck Wednesday project. In case you're new here, WtAFW is a celebration of the weirdest of the weird in erotica and romance. It's loosely inspired by one of my Instagram friends's hashtags, Weird Romance Wednesday, but whereas her submissions tend to be just quietly quirky and wholesomely fun, I was like, "NAH. GIVE ME THE WEIRD SHIT." So she gets spider men and centaurs and I get... COVID and El Nino erotica.

EL NINO CUMZ!!! (the three exclamation points are a must) has to be one of the weirdest recommendations I've ever gotten. The plot is just so over the top that I spent most of this book with my jaw dropped. It opens with mad scientist, Onin Le, doing his favorite hobby: photographing nude women in between inventing unethical inventions. Casually hiding a weather controlling device in your basement like it's NBD in between having your equally pervy assistant throw cold water on bikini-clad womens's boobs? That is swag.

Obviously, villains don't win even in erotica, and a cold front causes some major shrinkage that puts an end to El Nino's tyranny of horny. I looked to see if there was a sequel about La Nina, the opposite phenomenon, but no. Apparently this author was a one and done deal, which made me sad. The little tornado with the scribbly face and purple cartoon tentacles made me laugh for like a solid thirty seconds when this book appeared in my Instagram inbox. I honestly can't believe this book exists and I am so #blessed to be able to share it with all of you today.

So this was purely terrible. The writing was awful and there are tons of grammatical mistakes. The last sentence is missing a letter and a period and I'm not sure if the author just gave up and hit submit, or if it's supposed to be meta in some way (El Nino's work is never done). This was published five years ago but I have SO many questions. Did the author do this on a dare? Do they periodically remember the book when some unwitting sucker purchases a copy or borrows it on KU and go, "Whuh? Oh yeah, THAT?" Did they plan a sequel but then get discouraged?

I don't have the answers to those questions but I can tell you this: global warning leads to gang bangs, so if you're worried about unplanned pregnancy, you better watch those aerosol sprays.