Call Them by Their True Names by Rebecca Solnit 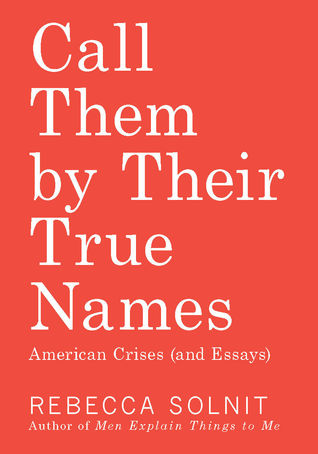 Rebecca Solnit is a very strong essayist but I find that some of her collections can be better than others. Personally, I found MEN EXPLAIN THINGS TO ME to be one of her more middling efforts, and THE MOTHER OF ALL QUESTIONS to be the strongest, simply because it was so raw and so powerful. CALL THEM BY THEIR TRUE NAMES falls somewhere between the two. There are some incredibly powerful essays in this book, like the one comparing Trump to the fable of The Fisherman and His Wife, or the one about the shooting of Alex Nieto and the gentrification of San Francisco.

As with all of her essay collections, Solnit isn't afraid to tackle tough subjects, whether it's about why we should get rid of Confederate statues (hard agree), or how female politicians are treated to ridiculous double standards (hard agree), or that the United States has a very uncomfortable habit of disenfranchising people of color, whether it's building a dangerous pipeline through Native lands or heavily gerrymanding areas where people of color live so as to make their votes count for less.

I feel like this book is written for people who are either clueless about the political system or who already agree with everything she says. But apart from a "YEAH, THAT'S RIGHT," I'm not really sure what this book accomplishes apart from supplying people who are less articulate in political matters (i.e. me) with a toolbox of vocabulary to talk about the issues that they wish they could change and want to hold others accountable for. That said, I think it's a worthwhile read. Especially her essays on Hillary Clinton and Alex Nieto. Both of those really touched me and one nearly brought me to tears.