Shade: A Tale of Two Presidents by Pete Souza 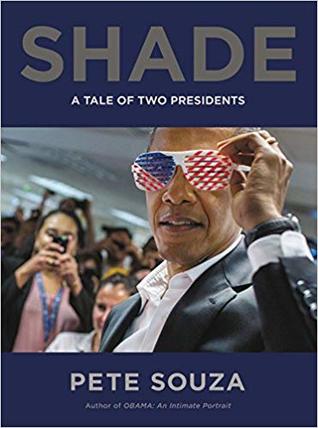 First thought, well, DANG. Can I hire Pete Souza to follow me around and make me look good? Second thought, GOD I MISS OBAMA SO FREAKING MUCH. Third thought, thank goodness he's (Trump's) not my "president" anymore. Fourth thought, OH GOD BUT HE COULD BE AGAIN. NO ONE IS SAFE. NO. ONE.

I was first acquainted with Pete Souza's work through his other book, OBAMA: AN INTIMATE PORTRAIT. He's the man behind the lens for some of the most famous pictures of Obama. So when I saw that he had created a follow-up work juxtaposing Trump tweets and articles against some of these famous pictures, I was all over that like rice. I mean, I don't need to make fun of the man but lord, DO I WANT TO. And apparently, so does Pete Souza.

Now, look. Was Obama perfect? No. But he was a man of dignity and compassion who did his best-- or tried to. I didn't agree with all his policies but I also didn't think he was going to run the country into the ground. A claim I simply could not make with the orange menace. This book compares and contrasts the highs of Obama with the multiple lows of Trump and it's honestly pretty chilling. I liked that Souza ends with a call to action imploring people to vote and talk to their congressmen (and women) if they want change.

Pretty good book but I'm not sure this is something I'd want to keep around, as reading it made me both bittersweet and sad.