No Filter by Grace Victory 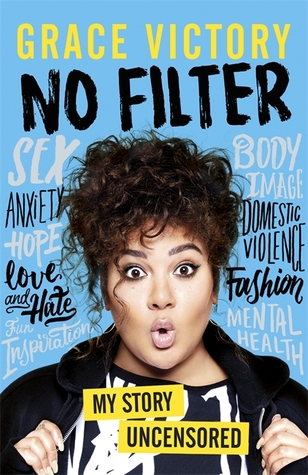 I'm going to be totally honest. I had no idea who Grace Victory was before picking up this memoir. Apparently she's a biracial YouTuber from the UK who had a small cameo in the first three Harry Potter movies as a background extra (she met Daniel Radcliffe!). I haven't read that many YouTuber memoirs, so I wasn't really sure what to expect with this one. But now that I've read it... WOW. I wish this book had been around when I was a teenager.

NO FILTER is perhaps the most comprehensive and relatable guide to adolescence that I've ever come across, and Grace herself may be the most humble, well-meaning, and down-to-earth YouTuber whose memoir I've had the pleasure of reading. She talks about literally everything I can imagine young people worrying about, whether it's EDs, self-harm, what happens in the bedroom (or out of it), how to identify a toxic friendship, pulling yourself out of depression, dealing with abuse (or assault), and accepting and loving yourself (and your body). After each section, she provides resources on where people can seek out additional help if they need it, and there are breaks where she defines key terms or offers step-by-step guides.

In between these more factual portions, she tells the story of her own life. What it was like being heavier and biracial in an environment when whiteness and thinness were not just seemingly ubiquitous, but also portrayed as more desirable. She talks about her absentee father, her relationships, her struggle with body image and depression, her work in a children's home, and her gradual rise to fame as a YouTuber who did not just the usual storytimes and makeup tips, but also talked about the grit behind the glam. Just reading this book really made me see why she is apparently as popular as she is in the UK: she doesn't sugarcoat and comes across as competent, humble, and real.

Unlike some YouTuber books I could name (but I won't), this is a book that I think should be given to ALL teens as part of a rite of passage or something. It's so good and the message it has is great.