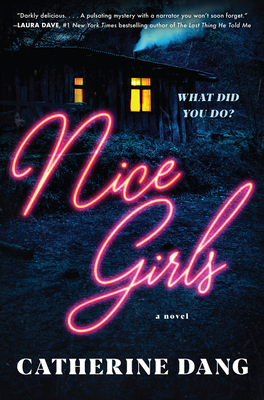 I'm sorry to say that I wasn't really into this book at all. I wanted to read NICE GIRLS because it showed up on a recommended list for people who enjoyed WATCH THE GIRLS, which is probably one of my all-time favorite books that I've read this year. I noticed it had a low rating but that didn't really bother me because unlikability of the heroine is one of those negligible points that I can put aside if the story is good and the heroine seems to have reasons to act the way she does.

I was delighted that Heather agreed to BR this with me, because in addition to BR-ing WATCH THE GIRLS with me, she was also there for BEAUTIFUL BAD, which was another twisty thriller with a problematic female lead that ended up being really good. NICE GIRLS starts out strong with the heroine being kicked out of her Ivy League school due to a physical altercation with a younger girl. She goes to her hometown, where she was known first as the unattractive chubby girl and then as the success story. Now she's the prodigal failure.

Drama quickly ensues because a girl she knew as a kid who's now a successful influencer (Olivia) goes missing. A body is found in a lake but testing reveals it to be the arm of a young Black woman named DeMaria. Our brilliant heroine Mary assumes it's a serial killer and promptly starts doing investigating of her own, which includes going to the home address of the DeMaria's grieving mother and asking for an interview, pestering her ex-childhood friend's father at his restaurant, and prying for more info from the police. (1) this makes no sense since I didn't really get what the emotional stakes were here. It's not like the book IF I DISAPPEAR, where the heroine was a morbidly curious true crime aficidionado, or a Gillian Flynn book where she's looking into a friend or relative. This was just... because I felt like it. (2) this is the kind of unlikable I don't like because it's done without basis or purpose. It felt like the plot was making the heroine do things instead of her character.

I'm really not enjoying this book at all so I'm dropping it at just halfway through. I could forgive the unlikable thing but I can't forgive boring and baseless. Every time it seemed like a twist was going somewhere, it would fizzle out and eventually, so did my interest.