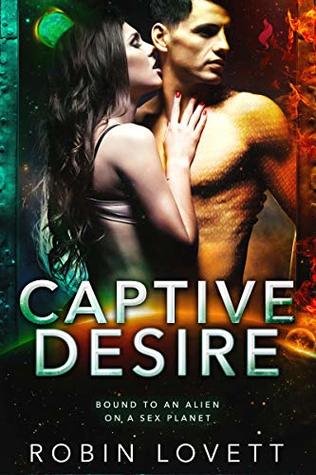 The Planet of Desire series is so weird that I kind of can't help but love it. Normally books that are all smut don't really do it for me (I'm just not super into that), but one thing I like about these books is the intense emotional connection that ends up building between the leads with some truly creative world-building in the background. It's kind of like X-rated Star Trek fic, in a way. Like, I could totally see this happening in one of those weird eps that fans prefer to think of as non-canon. "Oops, we landed on a horny planet and ended up fucking our way through the Sex Olympics while the pervy overlords watched and judged us" definitely feels like a Kirk move.

I actually liked this book a little more than the previous book. It wasn't as slow to start and it was a lot darker. There's a pretty twisted villain and some serious fucked-up shit. I saw some critical reviews taking issue with Assura's dark past and I guess how you feel about that will depend on whether you think people who have done bad things can be redeemed or even want to read about that. I don't mind it in fiction because fiction, to me, is a fantasy (and not, you know, something I have to think about in terms of real-world consequences), but I get that people who have maybe dealt with abusers might find that sort of storyline triggering. So, that's something to keep in mind when picking this up, I guess.