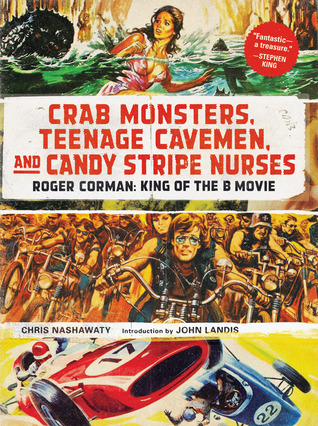 This book was so fun! I actually don't watch a lot of movies or television (I prefer books), but I do have a major soft spot for camp. So the idea of reading CRAB MONSTERS, TEENAGE CAVEMEN, and CANDY STRIPE NURSES really appealed to me because Roger Corman was a huge producer of pulpy horror, exploitation films, and cheesy Westerns, which are all things that I grew up watching (and still watch) with my brother and dad.

I really liked the production of this book. It's got a ton of amazing color photographs so you can see things like lobby cards, movie posters, and behind-the-scenes shots of iconic movies. I thought it was really cool how super famous actors and directors worked with Corman before they made it big. So many of these movies were low budget but ended up making quite a big profit because they gave the people what they wanted. And the people responded by joyously forking over their cash.

It's an oral history, so huge swaths of the book consist of interviews with actors, directors, and even the Ramones (who starred in one of Corman's films-- I think it was called Rock n' Roll High School). Fair warning: one of the people interviewed was Harvey Weinstein (luckily, I think he only appeared once). That didn't really age all that well. I should also point out that some of the photos depict gore or nudity.

I liked this book a lot more than I thought I would! One of my ongoing projects is trying to clean out my Kindle and I have so many weird books like this because I just impulsively buy whatever looks even remotely interesting as soon as it goes on sale. I went into this book mildly curious and came out of it with a watch-list and another book about Roger Corman that I picked up with my Kindle Unlimited sub: Beverly Gray's BLOOD-SUCKING VAMPIRES, FLESH-EATING COCKROACHES, AND DRILLER KILLERS. Sounds like a blast.