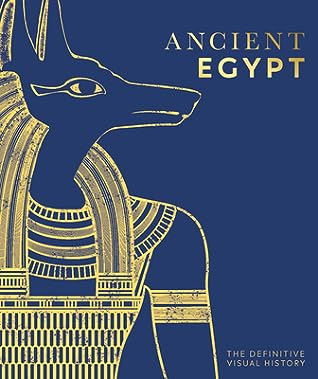 As a kid, I had two-- okay, three-- great loves: virtual pets, dinosaurs, and Ancient Egypt. In fact, I still think all three of those things are pretty neat today. But I only have a book on one of them, so today I'll be talking about ANCIENT EGYPT: THE DEFINITIVE VISUAL HISTORY, which is a coffee table book about... Ancient Egypt.

The production of this book is really, really nice. It's museum gift shop nice. It retails for about what you would expect to see it retail for in a museum gift shop, too, but I actually think it's worth it if you're really interested in the subject. This book covers early, middle, and late kingdoms, as well as the Greco-Roman period, and there's full color illustrations of everything from jewelry to statuettes to the tombs themselves.

There's also a ton of information packed in here. I skimmed through it pretty quickly, but thought it was interesting how even though people liked cats in Egypt, most of them weren't named (although some ancient cat ladies and cat men gave shout-outs to their kitty friends in their tombs), and I don't think they started showing up in art until about the middle kingdom and also the word for cat was "miw" (which I think is pronounced mew, lol). I also thought it was interesting how silver was apparently harder to find than gold (and therefore more prized).