When They Call You a Terrorist: A Black Lives Matter Memoir by Patrisse Khan-Cullors 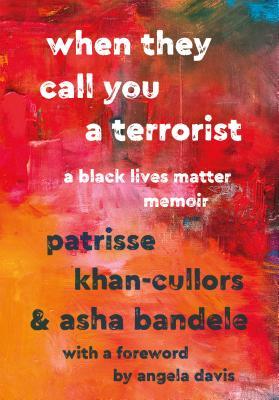 Whoa. This was absolutely fantastic. In case you didn't know, Patrisse Khan-Cullors is one of the co-founders of the Black Lives Matter movement (a movement I totally support, BTW). When this book went on sale recently, I snapped it up without a thought. I wanted to know more about this woman who started a movement to call out the broken systems and infrastructural injustices that deny Black people the "unalienable" right to life, but also impose oppression and segregation through societal structures rife with racial biases, with disproportionate arrests that carry hidden lifelong sentences, keeping people of color down by preventing them from getting jobs or subsidized housing and then condemning them further when they have no choice but to resort to crime. It's sickening and it should be called out, and the voices of those doing so ought to be amplified.

But this book is so much more than a manifesto. It's also a memoir in which Khan-Cullors talks about what it was like growing up poor, and how her educational system gradually began to fail her as she got older and less adorable. More "dangerous." She writes about her relationships and her love for her brother, who suffered from schizoaffective disorder and manic episodes and instead of getting the care he should have received during one of these episodes, was tased and shot with rubber bullets and delivered to his court hearing strapped up like Hannibal Lecter. This insight into her life allows us not to just get to know her as a person, but also understand the anger and despair that led her, and others, to found the Black Lives Matter movement in the first place.

This book is hard to read but so, so worth it. Even though it has trigger warnings for basically everything across the board, I felt like Khan-Cullors only gives details when relevant and necessary. She is a powerful and compelling story-teller and her words carry real emotional weight. I honestly don't understand how anyone can read these words and not empathize and not understand that the United States has a major injustice problem that needs to be addressed here and now.