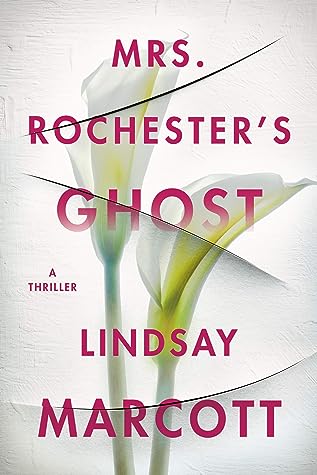 I wasn't sure how MRS. ROCHESTER'S GHOST would go. I only found out about it because it was on one of the Daily Deals that Kindle does. Some of the Amazon reviews seemed to be from angry purists who didn't like that the book was set in California/the United States. To which I say, "UM, IT'S A RETELLING? You can retell the story however you want?!" But whatever, I'm not here to argue about how you are and are allowed to write a retelling (spoiler: I'm right and everyone else is wrong). I actually don't want to say too much about how well this follows the original because that would be a spoiler, and I want everyone reading this book to be surprised.

The plot in a nutshell: Jane is a TV writer whose project has ended and now she's got no money and no job. Her childhood friend, Otis, has a governess gig for her out in California. The daughter of a rich tech magnate needs a live-in tutor, and they'd be practically next-door BFFs as fellow staff. She agrees, with reservations, and is promptly almost run over by her would-be employer on his motorcycle. Surprise, surprise, he's a dick. She takes the job anyway, and he continues to be a dick, but she also finds him attractive and funny because he's juuuuust self-aware enough to know he's a dick, which, as everyone knows, is the difference between finding a dick insufferable and finding a dick hot.

Sophia, the problematic daughter, has a lot of issues. Her birth mom died in a tragic accident and Beatrice, the late-Mrs. Rochester, was a total hot mess. Ex-model with severe bipolar who was subject to acts of violence and hallucinations because she kept going off her meds. MRS. ROCHESTER'S GHOST is told in dual timeline/dual POV style, so we hear mostly from Jane, but also Beatrice herself, so we're privy to her delusions, her faltering mental state, and what really happened when she disappeared. I loved Jane's more straightforward narration and how it contrasted with Mrs. Rochester, who was sort of an unreliable narrator because her reality could be very different from reality-reality. I thought it added a lot of suspense and tension, and kept the pacing driving forward.

MRS. ROCHESTER'S GHOST has everything I love in a book. Beautiful scenic descriptions, a likable narrator with real flaws, Gothic elements, shocking twists and disturbing secrets, and a central mystery that kept me turning pages: in this case: what really happened to Mrs. Rochester? ALSO, even though I liked THE WIFE UPSTAIRS, the romance in that kind of failed me. I'm a huge fan of Jane Eyre because it was one of the first classics I read and also, one of the first where I found myself really relating to the main character (as someone who saw herself plain and bookish), and the idea of her finding passionate love was just such a game-changer in classic lit-- for me, it's a must, so I was glad that Marcott at least kept that Gothic, churning maelstrom of emotions in this book and modernizing Jane's struggle with conventions so it doesn't feel quite so Victorianly prudish.

Overall, this was just fantastic and I definitely would read more from this author.