If I Disappear by Eliza Jane Brazier 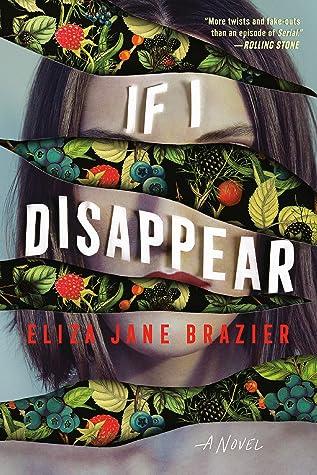 I seriously don't understand why this book has such low ratings. I bought it on impulse when it went on sale because I was attracted to the premise and the gorgeous cover. The heroine, Sera, is a divorcee with a litany of psychological and emotional problems who finds solace in listening to the voice of her favorite podcaster, a woman named Rachel who has a channel called Murder, She Spoke, where she talks about crimes and mysteries, solved and unsolved, interspersing them with a seemingly feminist bent and commentary on her own life. When she goes missing, Rachel decides that she's going to find her, so she goes to where Rachel lives, a rural California town called Happy Camp, and even gets a job at Rachel's family's ranch.

IF I DISAPPEAR has so many of my favorite tropes. It has a troubled narrator who may or may not be unreliable. It has stalking, obsession, and secrets. It's set in a small town, and better yet: a California small town. I've been to ranching towns that were like this, so it was so easy to envision the setting in my mind. The claustrophobic setting, surrounded by woods, makes this book have a veil of paranoia that really mirrors the heroine's own emotional state. I'm surprised that so many reviewers claimed that this book was boring. It's slow-paced but I felt like the psychological uncertainty inside the heroine's own mind built a setting almost as compelling as the ranch.

EVERYONE in this book is so creepy. It's clear the people in the town know something. It's also clear that Rachel's family has some issues. There are the usual Gothic tropes, too-- missing woman, filthy and oddly run-down buildings, mysterious warnings, dead animals (trigger warning)-- so it felt like a really interesting, rural ranch throwback to some of those 1970s Gothic romances I loved so much. There's even a suspicious hot guy (with a Texan accent) who has some interesting tensions with the heroines. I wish more happened with that, but we don't always get everything we want.

Overall, I would say IF I DISAPPEAR is an excellent book. I'd read more by this author in a heartbeat. Psychological thrillers are so hard to do, especially when most of the horror takes place in the heroine's own mind, and I feel like she did an excellent job capturing how we, as human beings, "hype" up our own fear, taking seemingly innocent and unconnected phenomena and building it into a kind of conspiracy. As someone with anxiety, I do this, and I could see myself freaking out like the heroine did. It makes me really sad that more readers didn't seem to see and appreciate this, but I think if you approached this book looking for more straightforward thrills and chills, you'd be disappointed.