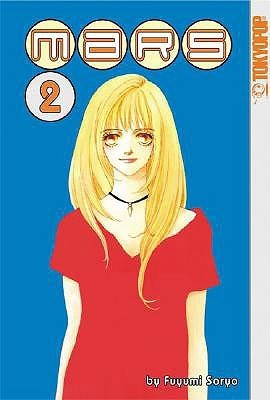 There's a lot of bad manga out there, but sometimes you'll come across a series that has exceptionally good stories and writing and you'll realize why manga fans are among the most passionate. I read part of the Mars series during my manga phase in college. As an overworked student who spent all of her time writing essays and studying, I often wasn't in the mood to read a dense novel, but manga were easy to consume and gave me the escape I sought when I was stressed out and anxious.

Mars is one of the few manga I've re-read that has held up to the initial reading. If you like soap operas, you'll love Mars: it has all of the usual tropes that are like catnip to the discerning garbage can-- good girl/bad boy, tragic pasts, death, suicide, mental illness, bullying, school gossip, forbidden romance, twins, plagiarism/theft, violence, dangerous sports, and so much more.

The heroine, Kira, is a soft-spoken artist. The hero, Rei, is a heartless bad boy who sleeps around and rides a motorcycle like he has a death wish. As you read more, though, you find out that appearances are deceiving. Kira is a lot stronger than anyone gives her credit for, and Rei is far more vulnerable than anyone would expect. It's a little like BEAUTIFUL DISASTER, if Travis weren't an abusive, misogynistic asshole. Rei is a playboy, but he doesn't hate women. And a lot of the women who wanted to date him only saw him as an accessory, which played to his insecurities too well...

This book gets even more intense than the last with more bullying, post-traumatic stress (done pretty well, by the way), and more hints at the dark secrets of both characters. We learn that Kira's father died in a car accident and Rei had a younger brother who everyone looked up to and admired who died under tragic circumstances. Kira also has her art stolen by an opportunist who capitalizes on her shy and unconfrontational nature, which is bound to hit any artist reading this pretty damn hard.

But it's not all doom and gloom. There are some truly touching moments. Seeing the blossoming intimacy between the heroine and hero and how much they care at each other is actually really beautiful. One of my favorite relationships is that of Tsukushi and Domyouji in Hana Yori Dango, but I'll be the first to admit how toxic that is. Watching Rei and Kira laugh together and go to an art museum together and seeing how much they trust each other is truly heartwarming.

I love the mature themes in this book and the writing is a cut above what you typically see in most shoujo manga. If you like titles like Peach Girl and Hana Yori Dango and don't mind trigger warnings or problematic elements in your books, I think you'll really enjoy Mars as much as I did. Bonus: the whole series is on Kindle Unlimited right now, so if you have a subscription you can binge through them with the same heedless greed as me.