Home Baked: My Mom, Marijuana, and the Stoning of San Francisco by Alia Volz 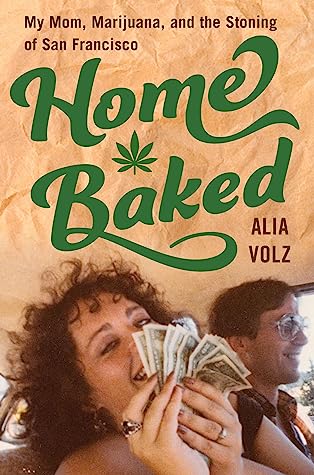 I have a lot of mixed thoughts about this memoir and I think a lot of others will, too. I live in San Francisco so you can probably guess what a lot of my thoughts are on the subjects discussed in this book are without my going into detail, but I am going to talk about why I don't think HOME BAKED will work for everyone, even though it did for me.

HOME BAKED is the journalistic style memoir of the author's mother, who made illegal edibles in the 1970s well before the legalization of cannabis was passed in California. Using this as the stage, Alia Volz writes-- through interviews with her mother and her friends-- on the changing cultural landscape of San Francisco as hippie culture yielded to punk culture, and the disruption that Acquired Immune Deficiency Syndrome caused, especially in, but not limited to, the LGBT+ population.

Speaking as someone for whom SF has been a background for years, I really enjoyed learning about the history of the City (yes, we really do call it "The City"). We have so much history here, and it's richly described in HOME BAKED on a deeply personal level, which gives it more relevance than you might find in a comparatively sanitized textbook or historical society lecture. I also found it hilarious that this book's release date is on April 20th. I appreciate a bit of well-placed humor.

The things I disliked about this book were things that made me uncomfortable. I understand that police discrimination is an issue, but the way Volz's mother reacts to the death of a law enforcement author who had been (admittedly unfairly) targeting her made me uncomfortable and I know it's going to make some people angry-- especially since it feels so unnecessary to the overarching narrative and doesn't even make Mer, the main "character" of this memoir, look good. Likewise, the dysfunctional family dynamic and questionable parenting practices are bound to draw raised eyebrows-- and harsh words-- from the pearl-clutchers. I am fairly liberal in what I will read, but there were things in this book that definitely made me squint and think, "Really? REALLY?" Also, there's the whole general weirdness of people who really believe they're psychics. Which... okay. It's harmless but also weird.

Overall, I quite liked HOME BAKED because it brought a new perspective to a city I know well, and it was like learning juicy gossip about an old friend. Anyone who is interested in California history will enjoy this book, but take the contents with a grain of salt and maybe don't read it at all if your values skew more conservatively.