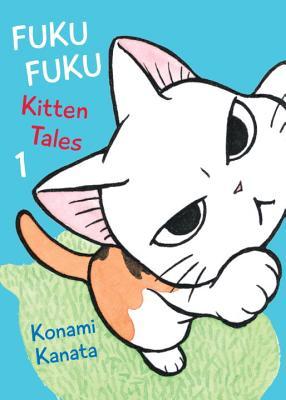 FUKUFUKU is by the same creator of CHI'S SWEET HOME and is about an adorable little old lady who has an equally adorable cat named FukuFuku. When we see them at the beginning, FukuFuku is a fully grown cat and the old lady meditates on how cute Fuku was when she was a kitten.

The rest of the story is basically a series of short tales of the various acts of kitten mischief that Fuku got into when she was young. I think anyone who owns a cat is going to love this book because it reads like a book that was written by someone who owns and loves their cat and is very familiar with their frustrating but adorable mannerisms. Like the "oh, I'm too cute to punish, aren't I?" head tilt. Or the, "oh, I don't know what the scratchboard is for but I'll scratch literally anything else" passive aggression. Or the, "oh, I hate what you eat but I'm going to beg for it anyway and act like you pulled a bait and switch when you give me a piece and I hate it just as much as the first time" look of betrayal during dinner time.

The illustrations are very round and simple, but that simplicity really works in the book's favor because it puts the focus entirely on the two main characters, along with a couple of side characters like a puppy and a neighbor cat. I don't actually have too much to say about this book except that it's one of the cutest manga I've read since HAMSTER CLUB and I absolutely loved every moment of it.